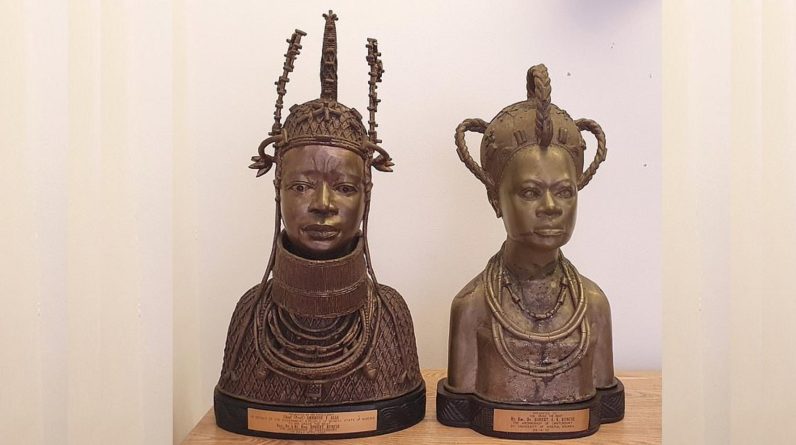 # In other countries : The Nigerian government on Saturday handed over two bronze artefacts to a traditional royal palace in southern Nigeria as part of a series of restorations of artifacts looted during the colonial period.

At a ceremony with songs, chants and dances, a bronze rooster and the head of a king were handed over to King Uku Akpolokpolor Ewuare II, one of the most traditional rulers of the most populous country in Africa.

Thousands of Benin bronzes – sculptures and artefacts from the 16th to 18th centuries – were looted from the palaces of the former Kingdom of Benin and are housed in museums in the United States and Europe.

Nigerian authorities are in talks to recall two objects kept in Aberdeen and Cambridge and plan to build a museum in Benin, in the southern state of Edo, where they hope to place other bronzes.

“This return gives us great pleasure because it signifies the hope that all the stolen goods will be returned,” said Charles Edosomvan, President of the Kingdom of Benin.

“We have been in consultation with various organizations, various museums and various governments around the world,” explained Father Dijani, Director of the National Commission for Museums and Monuments.

Both items have been withdrawn amid growing calls in Africa for Western nations to repatriate colonial plunder from their museums and private collections.

France, the United Kingdom, Belgium, the Netherlands and Germany have all received requests for the recovery of lost treasures from African countries. France returned 26 royal treasures to Nigeria’s neighbor Benin last year, and Benign President Patrice Dolon officially opened an exhibition of goods to the public in Cotonou on Saturday.

Germany agrees to repatriate hundreds of pirated artifacts to Nigeria. The Ethnological Museum in Berlin contains 530 artefacts from the Old Kingdom, including 440 bronzes – considered to be the most important collection outside the British Museum in London.