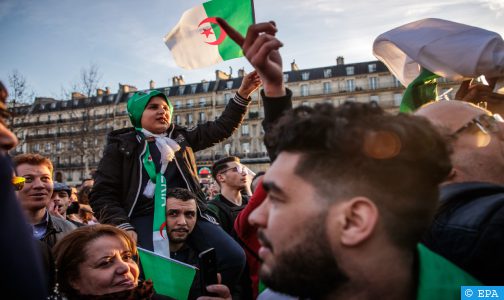 PARIS (Reuters) – Algerian immigrants staged a demonstration in Paris on Sunday to mark the third anniversary of the eruption of Hirak, an unprecedented political and socio-economic movement that has rocked Algeria.

Under the slogan “Freedom, Justice and Democracy in Algeria”, thousands of people, mostly Algerian immigrants but also supporters of Hirak, gathered at the Place de la Republic in the center of the French capital.

Demonstrators called for the continuation of the struggle for “a democratic Algeria” and for “radical change” of the organization. They also demanded the release of all prisoners of conscience.

Protesters chanted slogans such as “Long live Algeria”, “Revolution is still on the way”, “Stop repression”, “Leave the organization”, “People, yes, no army”. During this “March of Perseverance”, he wore Algerian flags.

“We will hold demonstrations this Sunday in support of the continuation of the democratic struggle, and for hundreds of political prisoners, including those who have been on hunger strike for the 23rd day. The world needs to know that the alliance of Algerian immigrants in the initiative of this demonstration has been confirmed on Twitter, take a stand and express it.

Launched on February 22, 2019, Hirak continues to demand a radical change in the political “system” in Algeria.

Apart from Paris and Montreal (Canada), another parade has been announced in Barcelona next Saturday.

On Thursday, a demonstration was held in the center of the European Quarter in Brussels, bringing together members of the Algerian diaspora from across Europe.

See also  Algeria "sorry" in response to Macron's call: Debone will not go to Paris

Protesters in front of the EU Council headquarters, where the EU-African Union summit is being held, have called on European companies to put pressure on the Algerian government to ease its crackdown on Hirak militants. They also condemned the “complicity” of some European states in the dictatorial course of the Algerian regime.