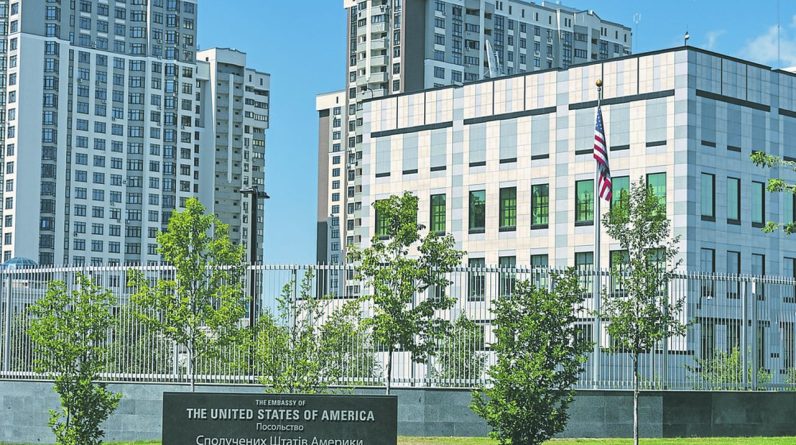 The United States is taking precautions. On Sunday evening the US State Department ordered the evacuation of the families of its diplomats stationed in Kiev, while opening on Monday in Brussels A consultation with European countries, So far it has been out of Russian-American negotiations on Ukraine.

London followed suit and announced it was withdrawing part of the staff of its embassy in Kiev. British Foreign Secretary Liz Truss is due to meet NATO Secretary General Jens Stoltenberg in Brussels on Monday. Australia follows suit, further instructing its nationals in Ukraine to “leave now.”

In this tense environment, NATO announced it would put forces on standby and send ships and fighter jets to strengthen their security in eastern Europe in the face of Russia’s military operations at Ukraine’s borders. A military initiative Australia wants to join, with the aim of “defusing” tensions, Australian Foreign Minister Marine Payne says.

A “premature” and “excessive” result according to Ukraine

Local and non-essential U.S. personnel can leave the embassy if they wish, and U.S. nationals living in Ukraine are leaving “to consider now.” Washington, in addition, advised Americans not to travel to Russia, specifically justifying the move with the “possibility of harassing American citizens,” especially by Russian police, and “arbitrary use of local laws.”

“While respecting the right of foreign countries to ensure the security of their diplomatic missions, we consider this action by the American side to be premature” and” excessive”, replied Oleg Nikolenko, a spokesman for Ukrainian diplomacy. For its part, the EU shows less concern and does not want to follow the example of the US. “I think the situation should not be dramatized and that if the United States does not provide us with information that justifies this decision, we should leave Ukraine,” said Josep Borrell, president of European diplomacy.

The situation in Ukraine is” unpredictable and could worsen at any time, ” the U.S. foreign ministry says in a statement, asking families of diplomats to leave the country. “We believe a Russian invasion could happen at any time,” a senior US official told reporters. “The United States will not be in a position to evacuate American citizens in this case. “The embassy remains open and Chargé d’affaires Cristina quien” remains in Ukraine, ” the official, who requested anonymity, added.

Russia demands a written commitment on not expanding NATO to Ukraine and Georgia and calls for the withdrawal of forces and weapons from the transatlantic alliance of Eastern European countries that joined NATO after 1997, including Romania and Bulgaria.

Antony Blinken, the US Secretary of state, has promised to “put ideas on paper,” but such demands are unacceptable to Westerners. “We will always respond to any deterioration in our security environment, especially by strengthening our collective security,” a NATO spokesman warned on Friday.

US arms deliveries to Ukraine

The security situation is considered worrisome. Moscow says it has no intention of intervening in Ukraine, but supports the demands of pro-Russian separatists from the self-proclaimed republics of Lugansk and Donetsk in eastern Donbass and has massed more than 100,000 troops, tanks and artillery along the borders with Ukraine.

“We believe an attack will not take place. But if so, we are ready to respond Economic and financial constraints Huge, ” European Commission President Ursula von der Leyen had already said on Thursday.

In Kiev, the Ukrainian Defense Minister announced in a tweet that 80 tons of weapons had come from “our friends in the United States.” “It’s not over,” Oleksiy Reznikov added. Antony Blinken will discuss, by videoconference this Monday, the “open talks” he had with EU members in Brussels on Friday with his Russian counterpart Sergey Lavrov. Series of options Prepared by the commission and submitted to ministers. They will be in addition to retaliatory measures approved after the annexation of Crimea in 2014.