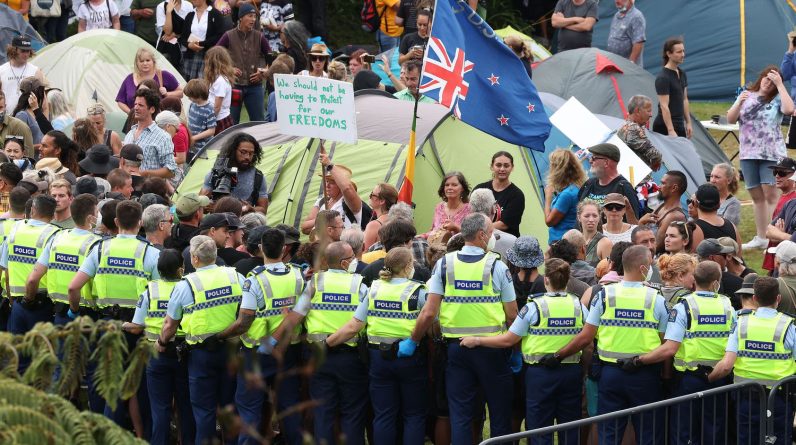 Although the” convoy of freedom ” is due to arrive in Paris on Friday, February 11, protesters opposed to the vaccine requirement have already been mobilized for days in other cities around the world. In Wellington, New Zealand, Thousands of people have been around Parliament for four days now. Hungarian motorists and truck drivers stand in solidarity with Canadians and are preparing to leave, as are the Netherlands. In Belgium, authorities want to avoid blockages at all costs.

In New Zealand and Australia, the first clashes

New Zealand is probably the Western country that has put in place strict measures to contain the virus. It is influenced by a movement that opposes the need for vaccination,which is destined for certain professional categories, such as teachers. For the past four days, Parliament has been surrounded by protesters, but beyond the embarrassment in the city centre, these demonstrations were held peacefully and, until Thursday 10 February, police made more than 120 arrests.
The next day, the hard core of protesters was still outside the entrance to parliament, but the climate did not fester again. They said they plan to stay put for as long as necessary.

In New Zealand, clashes took place in front of Parliament between police officers and those protesting health measures in Wellington, founded in the capital in protest. pic.twitter.com/DSgxh7cfRi

In Canberra, the Australian Capital, protests have been taking place for 15 days, Mrais even more people are expected on Saturday, February 12, for this day protesters called “Saturday of superheroes.” On social networks, the latter point out that they can take a vaccine that is in the capital.
In recent days, roads have been blocked by protesters, who have also attacked some traders, who were criticized for implementing health measures. Some politicians have also received threats.
The situation could turn sour on Sunday, as protesters will have to leave the exhibition centre they occupy. If they don’t leave on their own, officers will send the police to dispose of them.

Hungarians in solidarity with Canadians

In Hungary, with the exception of caregivers and teachers, there is no need for a health Pass or a vaccine. Companies can impose a vaccine on their employees, but the vast majority do not. In short, health measures are far less stringent than in Canada. One more “Hungarian independence convoy” was born on social networks, with the slogan “We stand in solidarity with Canadian truck drivers”. The group has 30,000 members and organized a weeklong operation that began on Monday, February 7. There were about a hundred drivers – the majority of motorists, and a few trucks – demonstrating on the highway. But they wisely stopped on an off-ramp without blocking paths. A more peaceful” convoy, ” not least because the police can issue huge fines. On Saturday, organisers are calling for a festive rally near Budapest, ahead of the convoy’s departure on Sunday.

Among the protesters, small entrepreneurs or unskilled workers, are anti-vaccines, but not that. What they want is for citizens to return to democracy. “We live in a country where censorship, eavesdropping and searches have reached unprecedented levels”, They note in their report. Viktor Orban is a movement that may appear to be anti, especially since elections are scheduled soon in Hungary. But it’s not organized, plenty on the internet, but the protesters, who are so few on the street, express a widespread discomfort common to many Hungarians, who feel suffocated by a regime that is moving further and further away from democracy.

The soldiers ‘ ultimate goal is a meeting in Brussels with a meeting scheduled for Monday, February 14. The initial goal was to converge there by 7 February, but the date was postponed by a week in the hope of allowing soldiers from all over Europe to gather there.

& Quote;; France, Belgium, Netherlands… How an oil stain “convoy of freedom” against health measures, after Canada

See also  Who Is At Fault For A Sideswipe Accident?

The goal of the Belgian authorities is to prevent vehicles from entering the city and cause unrest similar to those in Canada or New Zealand. From Thursday, February 10, Brussels has Municipal decrees prohibiting the entry of heavy goods vehicles, and the aim is to divert soldiers north of the capital, to the car parks of the Heisel Exhibition Centre. A move for soldiers who would have been able to reach the Belgian capital, because the federal government provides border controls. SNot looking too far away, Belgium’s neighbours are marked by a certain mobilisation. In Luxembourg, the scale of the mobilization is unknown, but calls for unification in Brussels have been issued in the Grand Duchy. In the Netherlands, on the other hand, there is already a rise in “convoy for freedom” power, as rallies have already begun. The first convoy was in Friesland in the north of the country, with rallies also planned for early Saturday morning.

The Federal Police have announced road checks across the country and other cities like Ghent are preparing, which also has a plan to ban access to heavy goods vehicles. The yellow vest movement rallied a lot in Belgium, days ahead of France for that matter, and police say they are closely monitoring social networks to deal with Belgian participation in the “convoy for freedom.”