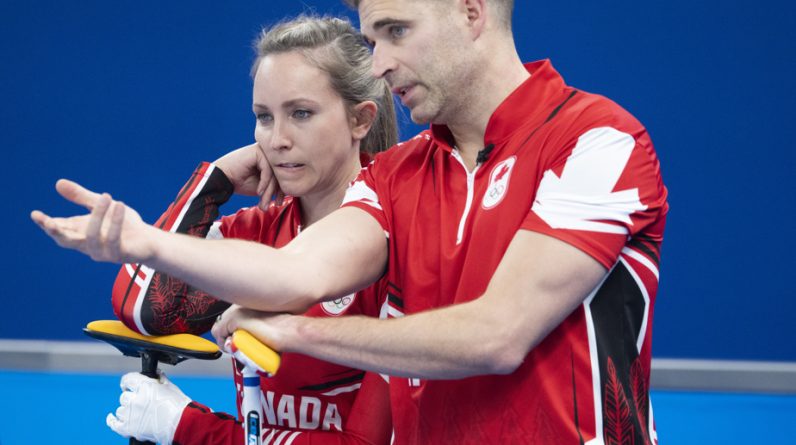 Play had already grown in intensity ahead of Sunday’s games at the (Beijing) Beijing Olympic curling tournament. Canadiens Rachel Homan and John Morris added a few more in a thrilling clash on Ice Cube.

Homan kicked his final stone with a second on the clock and tied it with two runs, and Canada added two more in the extra inning in a 7-5 win over Czech Republic in its first two outings.

“It’s absolutely the most dramatic curling game I’ve ever been involved in,” Morris said. A roller coaster fight. We had to hold on and hope for the best. »

However, it was the Canadian pair’s only win on Sunday. In the evening, against Australia, Homan and Morris started the match flat, coming from behind, but still losing 10-8 in extra innings.

Against the Czechs, the outcome of the game is at stake and with the need to hit the button on a layback to tie the score, Homan’s view of the clock was somewhat hampered.

Unlike sports like hockey and basketball, curling does not use a split second in its timelines. Canadian coach Scott Pfeiffer admitted he was minus one.

“It was a shot she tried so many times in these games, but never when she was so pressed for time,” Pfeiffer recounted.

Canada entered the evening session with the chance to advance to the knockout round with a win, combined with the loss of Sweden or Norway.

See also  In Australia, are covid patients being forced by the military to go to an "isolated camp"?

However, Australian pair Tahli Gill and Dean Hewitt started the match with three points before stealing two points at the end of the second.

At the break, after the fourth set, Australia led 7-0, but Canada collected four points in the fifth and went back into the fight.

After giving up one run in the sixth inning, the Canadiens scored three in the seventh, stole a run in the eighth and forced overtime.

Homan, however, missed his attempt to stick with another stone at home in the extra set, giving Australia (2-7) a second straight win after seven straight setbacks.

After all, this defeat puts Canada in a difficult position, Morris admitted.

As a result of the games played on Sunday, Canada has an overall record of 5-3, similar to Great Britain and Norway. Sweden, who completed the preliminary round, follow with a 5-4 win. Teams occupying the top four tiers will participate in the semifinals.

In the last outing of the preliminary round, on Monday, Canada will take on Italy, which has an immaculate 8-0 record. On Sunday night, the Italians defeated Sweden 12-8. At the same time, Norway beat Great Britain 6-2.

If Canada lose on Monday morning, the Swedes will advance to the knockout round because the tiebreaker is in their favour.

“I think it’s always necessary to beat Italy,” Homan said. We have to win. We have our destiny in our hands. »

Earlier, the Australian Olympic Committee (CoA) announced that Gill and Hewitt should withdraw from the competition due to a positive covid-19 Test

However, as revealed by AOC, public health officials advised the committee that Gill test results were within an acceptable range in the last 24 hours.

“I had packed my bags and was ready to go home,” Gill said.

He and Hewitt made the most of this positive result by defeating Switzerland 9-6, before surprising Canada.

“The feeling was amazing when we knew we could play,” Hewitt admitted.