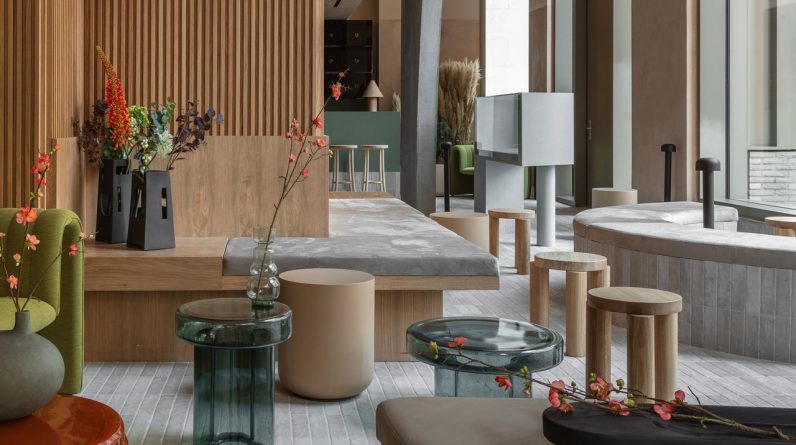 There are many hotels in London, but the Buckle Street Studios by Locke have the particularity of offering both spaces for peaceful disconnection and hyper stimulating environments.

Whether it’s a sightseeing trip or a business trip, the newly opened Buckle Street Studios in East London should offer you the room or apartment that suits your stay. In this 13-storey building, already the fifth opened in London by the Locke chain, the offer ranges from comfortable rooms of 16 square meters to spacious suites with two bedrooms, studios with built-in kitchens. In addition, there is a coworking space and a grocery store located directly in the building, as well as interiors decorated with soft colors, sensual materials and charming decorative details.

As for the “Leman Locke”, which is located not far away, it was again the New York agency Grzywinski + Pons that was responsible for the design of the building and the interior layout. The team led by the architectural duo Matthew Grzywinski and Amador Pons has built a tall and elegant building, which stands out for its rounded edges and for the very chic lamination of its building materials. The very slender silhouette of the building is divided into three horizontal bands: the lower level is covered with metal panels, the finish of which is nickel, followed by a wide segment of light bricks. The crown of the building is made entirely of glass bricks.

Grzywinski + Pons also designed the interiors: in addition to the 103 rooms, studios and suites, there are common areas such as the coworking area and the cafe, which invite you to linger and network even in rainy weather. A concept store is also part of the project. Unlike the rest, it is accessible to the public and attracts passers-by who can see from the outside its large glazed facade. In the Locke-Store, a kind of very arty gift shop, it is possible to admire and buy works by local artists, designers and craftsmen. Artistic and musical events are even organized there from time to time. And finally, be aware that the gym and the terrace of the neighboring “Leman Locke” can be used by guests of the “Buckle Street Studios”.