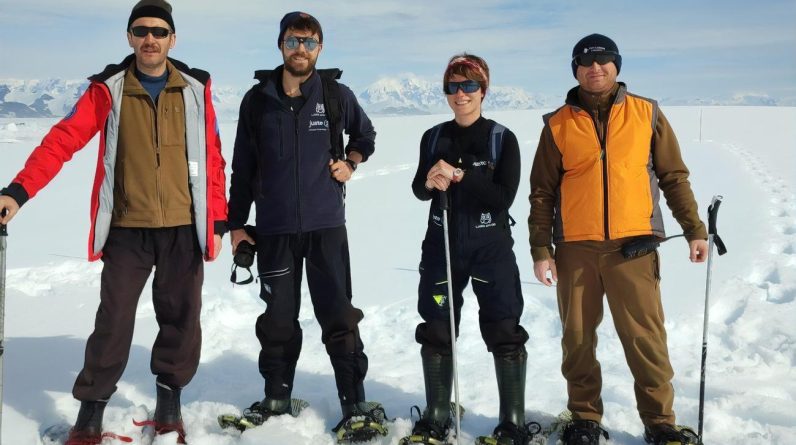 Researchers from France, Nils Tudrevo and Margot Leigh, came to the Academic Vernadsky Center. They Along with Ukrainian polar explorers Study the occurrence of atmospheric rivers – the narrow corridor of atmospheric moisture, which ensures the rapid transfer of moisture from the tropics to the middle and upper latitudes.

“Through joint research, scientists will be able to determine whether atmospheric rivers are associated with rainfall in the area of ​​our station and determine if one of them is the cause. Record December snowfall Or cause future rains. Now is a good time for such research, as most of the above events occur precisely in the Antarctic summer, ”they explained in the post.

Scientists have already visited the dome of the glacier on the island KalindesThere a snow sample location was identified and fenced.

“The isotopic composition of these samples will be analyzed in the laboratory, and thanks to the information obtained, it will be possible to determine where the moisture came from, which turned into rain in the station area,” NASC noted.

Legal plans to engage in sociological research at the Academic Vernadsky Center, and will also study the lives and work of Ukrainian researchers.

The Antarctic Station “Academic Vernadsky” is located on the island of Kalindes. Formerly it belonged to Great Britain and was called “Faraday”. On February 6, 1996, the station was relocated to Ukraine and renamed.

The station is engaged in scientific research on climate change, the ozone hole, and the response of animals and plants to global warming.

At the end of March 2021, to the Academic Vernadsky Station The 26th voyage departed… In mid-April, he arrived in Antarctica and picked up a stick from a colleague on his 25th voyage. The group was reported to be the youngest of all previous trips, spending about 13 months in Antarctica.

In July, the Ukrainian Antarctic Center Announced recruitment for the 27th voyage… The question papers were accepted until September 3rd. In the recruitment announcement, the government last year raised the average salary for polar explorers to UAH 54,000 per month, insisting that the trip be to the station first. Own research icebreaker.