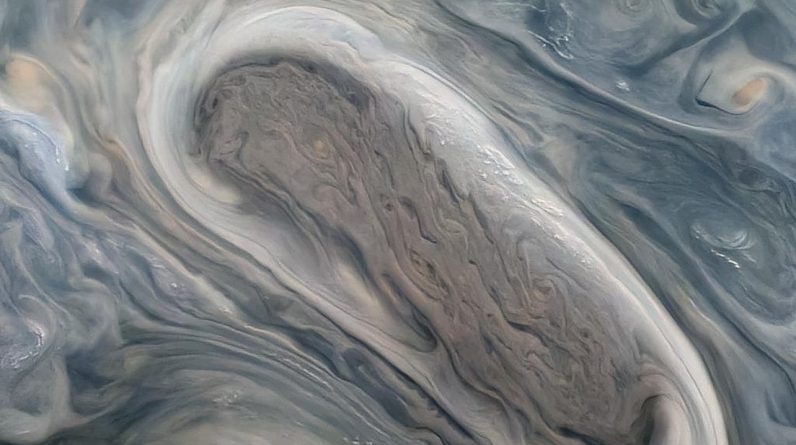 Images of polar hurricanes captured on a distant planet by NASA’s Juno study have allowed researchers to study the forces that drive them.

U.S. scientists have been able to determine that giant hurricanes that form around Jupiter’s poles are created by the same forces that move water in Earth’s oceans.

Polar hurricanes on the largest planet in our solar system were first detected in 2016 by NASA’s Juno study. Since then, experts have speculated that these storms are driven by convection, a process known on Earth in which hot air expands and rises to higher, cooler and denser heights. However, this theory has not been proven until now.

“When I saw the richness of the turbulence around Hurricane Jovian, it reminded me of the turbulence you see in the ocean around the vortices, with all the little strands and vortices.” Announced Marine researcher Leah Siegelman, researcher at the Scripps Institute of Oceanography at the University of California, San Diego (USA) and author of the new study. “For example, they are particularly evident in high-resolution satellite images of plankton flowers,” he added.

The researchers studied infrared images of Jupiter’s north polar region, particularly the polar vortex cluster. Based on that, they were able to calculate the speed and direction of the wind, following the movement of the clouds. The panel then explained the infrared images based on the thickness of the clouds. The warmer regions are well matched with the clouds, which can be seen more deeply in Jupiter’s atmosphere. Cold regions represent the dense layer of clouds that cover Jupiter’s atmosphere.

This allowed the team to show that the rising hot air carries energy into the atmosphere and becomes fuel as the clouds grow, turning into large-scale hurricanes as seen around the poles. “It’s fascinating to study a planet so far away and find the physics that fit in there,” Siegelman said.

Similarly, scientists point out that just as the science of the Earth’s oceans may help unravel the mysteries of Jupiter’s atmosphere, the planet’s recent discoveries may shed new light on these large – scale processes on Earth.

The Study Published Monday in the journal Nature Physics.

See also  Astronomers in the farthest orbit of the galaxy