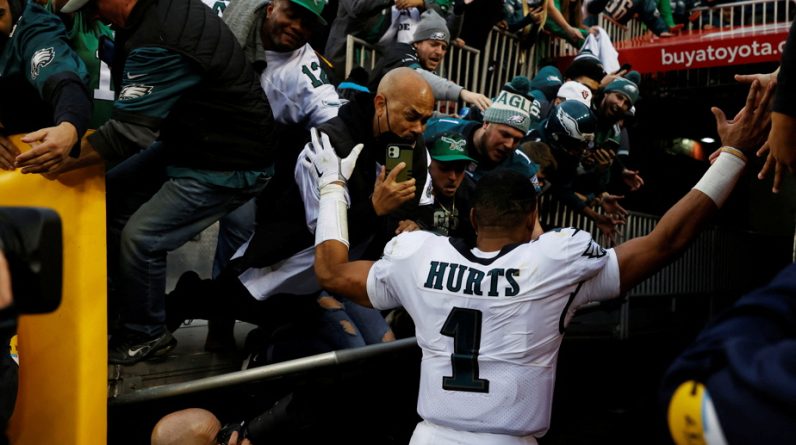 Philadelphia Eagles quarterback Johns Hertz sent a letter to the NFL and the Washington team on Sunday asking what action would be taken after they lost a ban under the weight of the fans. An “almost tragic” incident, he writes.

The scene took place at FedExField after the game between the Eagles and Washington. Just before Jalan Hertz entered the subway to leave the field, one of the metal barriers collapsed under the weight of the fans celebrating their team’s 20-16 victory.

About ten supporters fell down from a distance of a few meters with the barrier. Quarterback was able to avoid him narrowly. A photographer knelt down to take a picture of the player, who was hit hard and had difficulty getting up.

“You know that many people, including fans, members of the media and myself, were thrown into a dangerous situation when parts of the FedExField tunnel collapsed,” he wrote in his letter. Washington Post Nikki Japwala, Tuesday afternoon.

“While the barrier could have prevented me from colliding, it was not the same for others who could have been injured,” he added.

In shock, Hertz leaned in to help one more. Olympian was quiet, and he agreed to take a photo in consultation with some of the fallen fans. He then greeted everyone before retreating.

“Although I’m calm, I understand the seriousness of what happened, and I’m very concerned about the well – being of the fans and the media. I want to know what the NFL and the Washington football team are doing to prevent this from happening again in the future.”

“NFL resources and systems ensure our safety while playing this physical game, but what happened on Sunday, after the final whistle, put both fans and players in unnecessary danger.”

“I look forward to hearing from you on this matter,” he concluded.