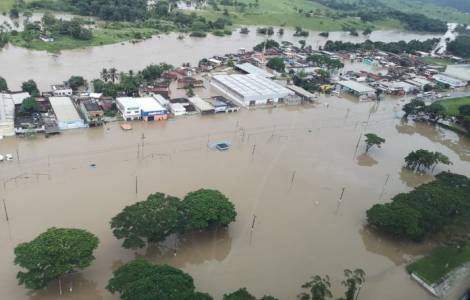 Bahia (Agenzia Fides) – Bishops, Priests, Representatives of Corridas, Brazil and Coordinators of the Northeast Part 3 Conference of Bishops and Movements participated in an online meeting yesterday, December 28, to evaluate the results of the SOS. According to the note received by Fides. Participants presented the situation of the dioceses most affected by the recent rains in Bahia: Dexira de Freidas, Jeque, Vittoria da Conquista, Itapuna, Ilhius, Amarcosa and Unapolis.
During the meeting, Bahia Civil Defense reported 20 deaths due to heavy rains in the southern part of the state in recent weeks. More than 31,000 people are homeless: they no longer have homes or have access to it. 116 municipalities in the state were affected by the rains. The two most recent deaths were recorded by authorities in Itapuna, where a 33-year-old woman was killed in a landslide and a 21-year-old man was swept away by the current. Of the 116 municipalities affected, about 100 municipalities have declared a state of emergency.
Another serious problem is the main roads leading to the cities and, above all, the interior, damaged, making transportation impossible. Barriers are collapsing, bridges are collapsing, and some roadblocks damaged by rain and river flooding are preventing families from carrying aid. Some areas can only be reached by helicopter.
In this context, the unity of families, the efforts of various organizations in civil society and the role of the Church as a house of mercy that welcomes and cares for the most suffering should be emphasized. Churches and communities have become a focal point for donating and collecting clothing, food, blankets, and mineral water.
The SOS Bahia and Minas Gerais campaign, coordinated by Caritas Brazil, raises funds for the purchase of food, water, clothing, diapers, personal hygiene items and protection against Covid-19, which will be distributed through Diocesan Caritas near key areas. Help thousands of homeless people displaced by heavy rains that hit the states. (SL) (Agenzia Fides 12/29/2021)