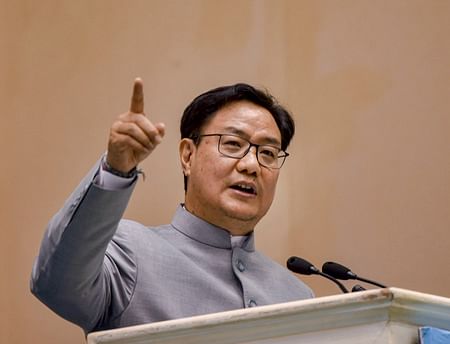 Kiran Rijiju, the Union Law Minister, has said that artificial intelligence technology will greatly help in resolving pending cases in the courts.

The closing ceremonies of the Constitution Day celebrations, which were held on the sidelines of the Supreme Court, took place on Saturday. Participating Minister Kiran Rijiju said:

The courts in the country are already in the process of switching to hexadecimal technology. Artificial intelligence technology can do amazing things to help people get justice and reduce pending cases.

There is no alternative to the idea that machines cannot function like humans. But machines can help judges provide details about the case and make some important decisions.

Infrastructure Development: Combining artificial intelligence technology with the efficient functioning of the judiciary will make justice available to the people faster. It is necessary to improve the basic infrastructure in the courts to reduce the number of pending cases.

The BJP-led government has been ensuring that the infrastructure of all courts, from the lower courts, is upgraded with a view to ensuring timely access to justice to the people. The Central Government is committed to providing modern infrastructure facilities in the courts.

Alternatives: Measures are being taken to strengthen alternative means of resolving issues in order to prevent the backlog of cases in the courts. Importantly, the federal government is considering granting legal recognition to the arbitration process, he said.

See also  Big change on the Internet: Do we pay for content that is now free?