Home Top News After the crisis with Australia, France turned to Indonesia 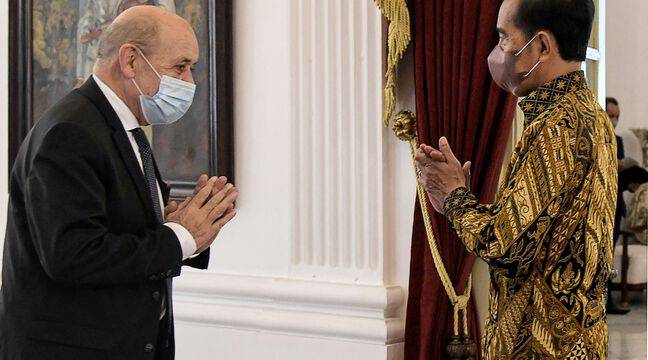 Following Australia’s setback in the Indo-Pacific strategy, the Kwai D’Orsay decided to reconsider its alliances in the region. France has committed itself to a “strengthened partnership”Indonesia, The largest country in Southeast Asia, was announced by the Foreign Minister in Jakarta on Wednesday
Jean-Yves le Drian.

He therefore signed with his Indonesian envoy Redno Mersudi on the “Action Plan to Strengthen This Strategic Partnership” since 2011, he said during the two-day visit. In 2022 the relationship will be deepened “in security and maritime affairs, especially by creating bilateral maritime dialogue,” but also health, energy and Climate change.

As Indonesia has been in talks for months to buy 36 Rafale fighter jets, Jean-Yves Le Trian met with Indonesian Defense Minister Prabovo Subianto on Tuesday. Amid growing tensions between Beijing and countries bordering the sea, Jakarta is also interested in submarines, corvettes and other military equipment. China South.

France has seen its strategy split in the regionAustralia Agreement on the purchase of French submarines and the announcement of a strategic alliance called AUKUS between this country, the United States and the United Kingdom. Out of this frustration, Paris wants to strengthen its alliance with its former allies Japan and India, but also with Indonesia, Malaysia, Vietnam, South Korea, New Zealand and ASEAN.

This is not a random moment to return to Indonesia. The country will see its diplomatic weight strengthen when it assumes the G20 presidency in December, while France is preparing to assume the presidency in January.European union In the first half of 2022.

Indonesian President Joko Widodo during his meeting with Jean-Yves Le Drian promoted closer ties between the two countries. He called for speeding up negotiations for a free trade agreement between his country and the European Union, but warned against “discriminatory” trade practices. “I support sustainable trade, but I deny the fact that environmental issues are used as trade barriers,” he said.

Since 2016, the European Union and Indonesia have been negotiating a trade agreement, which has prevented controversy, especially over palm oil, of which Indonesia is a leading exporter. Indonesia and Malaysia have systematically opposed EU restrictions on the use of palm oil-based biofuels to combat deforestation. Nevertheless, the visit of the French Minister resulted in a letter from the French Development Agency, Indonesia’s power monopoly PLN, and the government to finance a 500 500 million energy transfer in Indonesia.