Home Sports Is Xavi the correct man after Koeman exit at Barcelona? 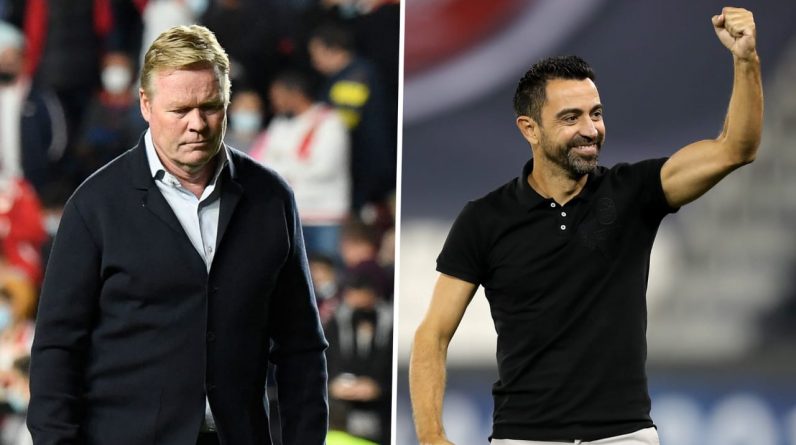 Among the biggest talking points at the moment, is who will be the next manager at Barcelona, after Wednesday’s sacking of Dutchman Ronald Koeman. The Catalan club is restructuring after two horrific seasons and it is time for calculated steps after a series of calamitous decisions that put the club where it is.

After dominating European football for the better part of the last decade, fortunes started turning for Barcelona, with top players leaving and the transition from the likes of Victor Valdes, Xavi Hernandez, Andres Iniesta and Puyol heralded a new era.

Neymar would also leave in a big money move to PSG, but this is where the calamity started after huge chunks of the money received was splashed on the likes of Philippe Coutinho, Ousmane Dembele and Antoine Griezmann.

Years later, the spending spree hasn’t paid off, and the last two seasons have been marked by massive exits and historical defeats. It has been unstable at the club and the final days of Koeman’s leadership could be predicted.

The announcement came right after the 1-0 loss to Rayo Vallecano and immediately it emerged that club legend and Spain’s World Cup and Euro winning midfielder Xavi Hernandez would be favorite to take over.

While the news simmers, Barcelona have already registered a 1-1 draw in post Koeman time and there will be time for them to recover, they aren’t where they were in European football when Xavi was actively involved.

At least with the Champions League, Europa League and Europa Conference League taking center stage in midweek, much focus won’t be on Barcelona. They have a relatively easy fixture against Dinamo Kiev and are in the odds on Wincomparator, they are billed favorites in the game as they seek a first away win of the season.

For Xavi to be considered in the role, isn’t a matter of a match made in heaven but a case of convenience. He hasn’t been on very good terms with current Barcelona president Joan Laporta and even during the club elections, he openly supported Laporta’s opponent – Victor Font.

It may have been the reason eight months ago, as Laporta openly showed he didn’t prefer Koeman for the job, he also felt Xavi wasn’t the right man for it. But circumstances, ambition and the club’s financial standing at the moment make Xavi a top candidate.

He knows the Barcelona structures well and he shares a belief in developing systems and style of play – the very thing he has done well at his current work station, Al Sadd. Barcelona, who have had to release a number of their stars to be able to balance their books, will do with someone a bit sympathetic with the club. Xavi fits that.

For a manager that would benefit from patience at the top, Xavi will do well, as he will find a band of immensely talented youngsters ready to learn as well as key senior players who were his team mates from back then – Sergio Busquets, Sergi Roberto, Jordi Alba and Gerard Pique, plus Marc-Andre ter Stegen.

All Xavi will need to do at Barcelona is set out a well planned route to success; a style of play that would ensure Barcelona can stay up there among the top teams and be able to generate finances to fund the beefing up of the team.