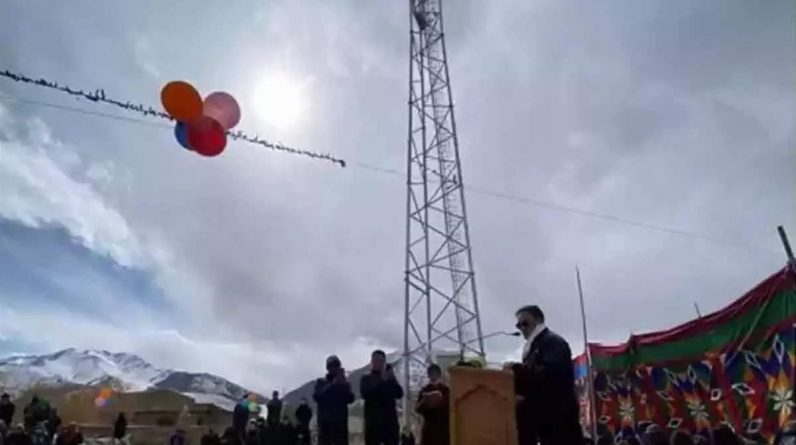 New Delhi : Ladakh is on the border with China Demsok For the first time a mobile phone rings in this remote border village. This area is due to the mobile tower of Reliance Jio set up in Demsok 4G mobile connection Has arrived. People in the area have been watching the link for years. For the first time, people are connected to 4G voice and data mobile networks. By Le MP Jamayang Sering Nam Long live The mobile tower was left open.

The MPs thanked Reliance Jio officials for completing the mobile tower works on time. He said the tower would definitely be useful for the area. Meanwhile, due to snowfall and bad weather in the area, there is only work for 6 to 7 months in a year. Along with Demso, 4G services have also been launched in the border villages of Sushul, Nyoma Taruk and Turbuk in Ladakh.

Reliance Jio’s 168 mobile towers are under construction in Ladakh. Geo is the only telecommunications network operator in Siachen’s pace cameras and Johnson Ridge. Various villages in remote areas like Sanku, Taifsuru, Shargol, Nubra, Khalsa, Kharu, Dras, Panamik are already under the geo network. Work is underway to expand the network to remote villages. Geo has been commissioned by the USOF to build 62 towers, 44 of which are operational.

Geo has connected Ladakh with three different fire routes to ensure network survival in the area. There are three fiber cable routes: Le-Srinagar, Le-Manali and Le-Qures. Both routes are currently operational and Leh-Gurez is expected to launch soon.

The launch of Geo 4G service in Demsok will benefit the people and tourism sector in the Union Territory. It will transform the lives of the people of this area through the health and education sectors. It is also important for economic growth and will create income opportunities for local youth and businesses.

Step: The company has already made a big revelation before the launch of the Poco M4 Pro 5G, see details

Step: For this Deepavali, your photos will come as a sample, use ‘these’ 5 camera apps, see list

Step: Today is the last chance to get big discounts on ‘Ya’ products including smartphones and smart TVs.