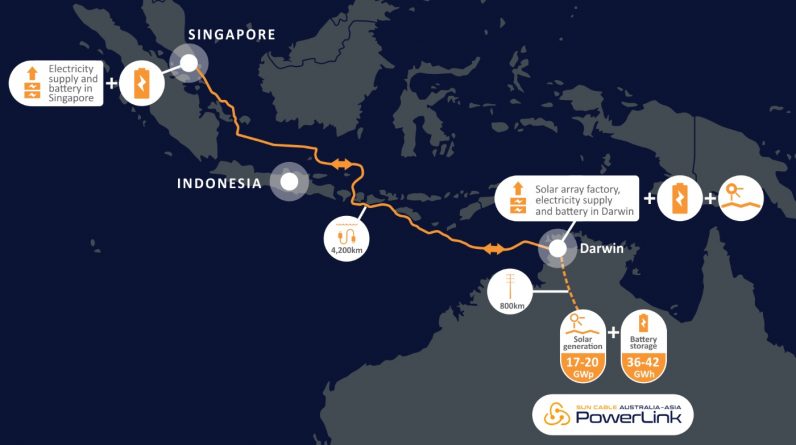 By 2027, millions of families in Singapore will be able to heat, cook or light up solar power from Australia! A 5,000-kilometer submarine will be towed between the two regions.

One of the solutions to get rid of carbon is renewable energy. Among them, the world’s largest photovoltaic park will be set up, with plenty of sunlight available, especially in northern Australia (800 km south of Darwin). Sun Cable is responsible for building this 12,000 hectare solar farm!

This place is not randomly selected, solar radiation is especially important there, of course it is a desert: installing thousands of solar panels does not bother many people. From 2026, the photovoltaic park will produce 17 to 20 gigawatts of solar energy, which will be stored in a large battery with a capacity of 36 to 42 GWh.

Part of the energy generated by this solar farm is destined for Singapore, and a cable will be laid under the sea to connect these two parts of the world at intervals of more than 5,000 km. This is a huge $ 22 billion project, but it is essential if Singapore is to achieve its carbon reduction targets. The Australian park is expected to provide 3.2 gigawatts of solar power to the city-state or 15% of the energy consumed by the city.

These are the 3 million homes that will benefit from this green energy from Australia, which will remove 11.5 million tons of CO2 (equivalent to taking 2.5 million cars off the road). The project, dubbed the Australia-Asia Powerlink, has not yet received the funding it needs, but it should not be too much of a problem as the Australian and Singaporean governments support it.