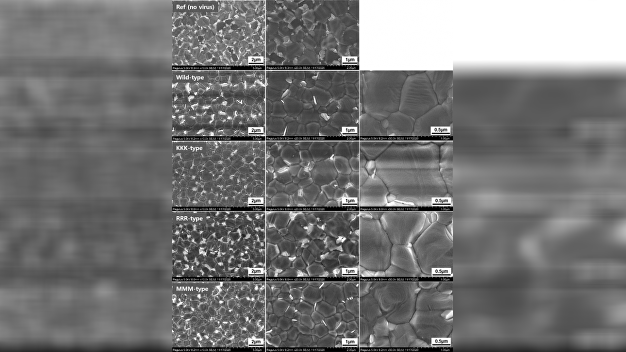 [아이뉴스24 정종오 기자] A unique study has emerged that improves the photovoltaic performance of perovskite solar cells containing bacteriophages, viruses and bacteriophages that parasite bacteria instead of chemical compounds. A Perovskite solar cell is a thin film solar cell that uses an organic / mineral hybrid perovskite crystal structure (oxides with different characteristics such as insulators, semiconductors and conductors)

Unlike polymer additives that require organic synthesis, bacteriophages are relatively economical because they can obtain a certain amount of particles in large quantities through a biological method called ‘cultivation’.

On the 2nd, the research team of the National Research Foundation of Korea (Sungyungwun University), Professor O Jin-woo (Busan University) and Professor Kim Hyung-do (Kyoto University) added viruses to improve the quality of Perovskite crystals. And the Perovskite solar cell device that absorbs sunlight. The ability of light to convert it into electrical energy has been improved, ”he said.

Chemical additives have been used in the past to correct defects that may appear during the formation of perovskite crystals and to increase the photomolecular efficiency. Chemical additives have drawbacks in which harder solvents are used, the process is more expensive and the purity of the resulting products is poor.

The study team used bacteriophages that could be obtained in large quantities through a culture instead of traditional chemical compounds. Instead of very long polymers or very short single molecules, the right size M13 bacteriophage (width 6.6 nm, length 880 nm) was used for the grain.

Thereby, the formation of uniform and large Perovskite crystals was induced, and the Perovskite solar cell with high photosynthesis was perceived as a thin film.

The manufactured Perovskite solar cell recorded 22.3% photovoltaic efficiency. This is an improvement compared to 20.9% on the current device without the M13 bacteriophage.

Last year, when the research team first announced an approach to applying M13 bacteriophage to a Perovskite solar cell, the photomolecular efficiency was improved from 20.1%.

By genetic manipulation, the amino acid lysine, which binds to perovskite, is amplified on the surface of the bacteriophage to further enhance bonding with perovskite.