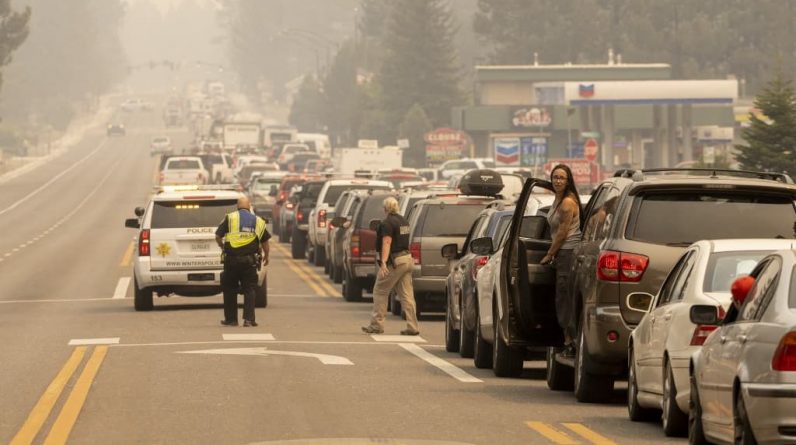 Several thousand people were called to evacuate Monday on the southern shores of Lake Tahoe in the western United States, and as the Caldor fire approached it had already covered 700 km.

Thousands of people were ordered to leave the southern coast of California on Monday, the most touristy area since the approach of a fire that destroyed the area for more than two weeks.

Thanks to severe drought and prolonged winds, the flames moved south of Lake Tahoe on Monday, bordering Nevada, a tourist city on the shores of North America’s largest alpine lake.

“Conditions and fuels are historic,” Fire Commander Jeff Week told the San Francisco Chronicle. “We are going to put out this fire. But it will not be today,” he said.

The Caldor Fire is one of dozens of burns devastating western America affected by a prolonged drought that is further exacerbated by the effects of climate change. More than 7,000 km2 of vegetation has already been burned, more than twice the average area at this time of year.

Tens of thousands of people had to flee the blaze, often without even knowing when they would return or find their homes intact.

The door was knocked on at 10pm last night to warn the Sacramento Bee newspaper, “Corinne Cobel, who lives in South Lake Tahoe,” to get ready. “At 10am this morning, it was the police who told us to leave. I was nervous,” he added.

More than 22,000 people were called to leave

In all, about 22,000 people were ordered to leave the area Monday morning. An AFP reporter saw a line of vehicles trying to get out of South Lake Tahoe, malfunctioning, bumper bumper.

Further north, the gigantic Dixie fire continued to spread, sinking more than 3,000 km since its departure six weeks ago.

As of Monday morning, in California alone, more than 15,000 firefighters were fighting on the ground against about fifteen large-scale wildfires.

Their numbers and intensities in Western America have multiplied in recent years, with a significant length of fire season.

According to experts, this phenomenon is particularly associated with global warming: an increase in temperature, an increase in heat waves and rainfall in places make for an excellent fiery cocktail.