Home Science Mark Haber, researcher in the genetic study of the Arab world for Al Jazeera Net: We studied the genes of 137 people from 11 Arab countries and their ancestors | Lebanon 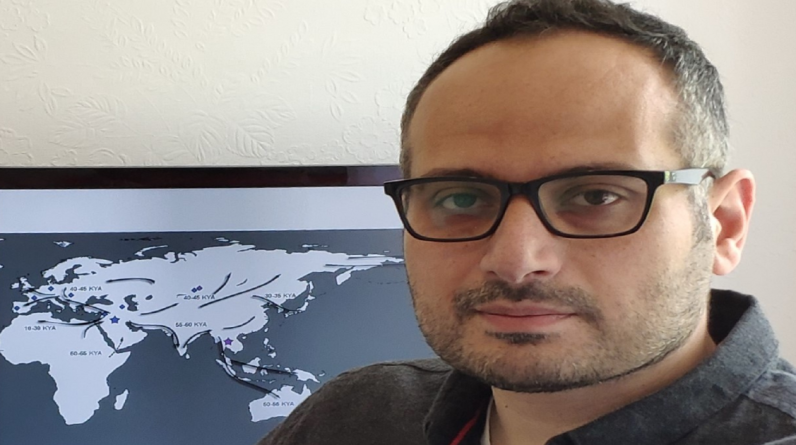 The Middle East is not well included in international genetic studies, so many aspects of the genetic variation of the people living there were not previously known.

AlgeriaDr. Mark Heber, a Lebanese researcher, is the chair of a research team at the Institute of Cancer and Genetic Sciences at the University of Birmingham in the UK and is one of the international team involved in the exciting study of the genetics of the Middle Eastern population. The results were released on August 4 in Cell. (Cell) Published in the journal Press Release About the study.

Although researchers have important information about the ancestry of people living in the Middle East, Mark Haber did not hide the fact that there are many questions that concern them, and confirmed that these questions are subject to future scrutiny in an interview with Al-Jazeera Net via email:

Human DNA is the result of past biological and demographic events experienced by humans throughout history, i.e., mutations can occur naturally from one generation to another, and then carry with them when people migrate and mix. Others.

Most of these new mutations have no effect, but may alter the function of some genes. We study these mutations and whether they have a positive or negative effect by generating and sequencing the complete genes of people from different populations.

The people we studied were from Lebanon, Syria, Palestine, Jordan, Iraq, Saudi Arabia, UAE, Qatar, Yemen, Oman and Egypt. We studied about 137 samples and it took about two years for the last job, but this is an extension of the work we started 5 years ago.

DNA information is not just for these people, but for all of their ancestors, it acts as a historical data bank.

Our DNA comes from both parents, and both parents received their DNA from their parents, so a person’s DNA is an extension of many that came before and includes information about all of those people.

This means that the DNA of 137 people contains information about millions of people, not just the already educated one.

All humans, including those living in the Middle East, came from a population group that lived in Africa about 200,000 to 300,000 years ago.

Then, about 60,000 years ago, a group came out of Africa and split in two. One was spread all over the world and the other was in the Middle East. The people of the Middle East still have some origins from these early peoples.

As genetic researchers we see that ancient changes in people’s lifestyles have affected their genes.

For example, about 8,000 years ago, people in the Arabian Peninsula began to switch to animal husbandry and animal husbandry. This change in people’s lives led to better digestion of milk and increased population growth.

In our study, we found that diabetes-related mutations have been increasing in the population over the past two thousand years, which is surprising because if these mutations are harmful they should decrease rather than increase over time. This helped us to believe that these mutations may have played a different role in the past, but today some environmental or life changes can be harmful.

In fact, we do not yet have a scientific explanation, but this is a surprising and surprising thing that we would like to investigate in the future.

Of course, there are diseases that existed in the past and are still prevalent today, but our study highlights diabetes because the mutations associated with it seemed to be under natural selection, i.e. they were affected by some of the factors that we will diagnose in the future.

The Middle East is not exactly included in international genetic studies. Many aspects of the genetic variation of the people living there were not previously known.

When we generated DNA sequencing data from the Middle East and compared it with other parts of the world, we found millions of regional-specific mutations, most importantly, the majority of the function of these mutations is not yet known, and their understanding and analysis will be the basis for future studies.

In fact, we do not encounter any particular difficulties because all the necessary instructions are available in our labs. I see our study as the beginning of an understanding of the whole side of genetic diversity in the Middle East.

In the future we will study more DNA, not only of people living today, but also of people who lived in the past by studying archaeological remains. This will allow us to better understand the changes that occur in our genes and their impact on our health.