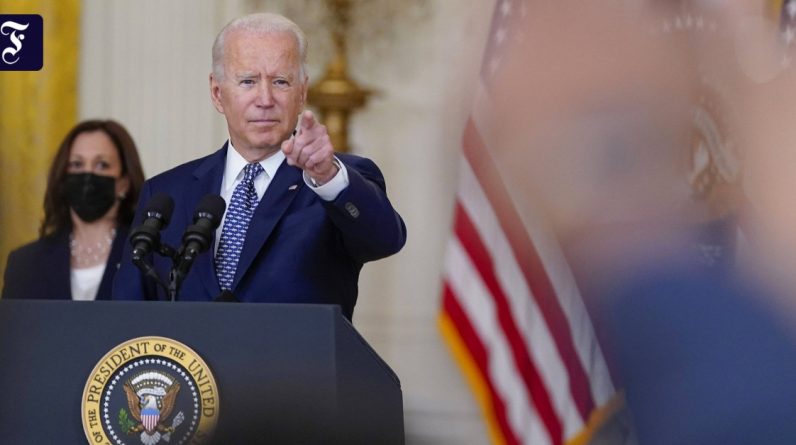 D.According to US President Joe Biden, the fight against the extremist Islamic Taliban is now a matter for the Afghans. In view of the Islamists’ latest advance after the widespread withdrawal of international troops, Biden told the White House on Tuesday that Afghans now “must fight for their own state.” Their armed forces are superior to the Taliban militarily, both in terms of military strength. “But they have to fight,” Biden said.

The US president also called on the political leadership in Kabul to pull together. In fact, he said, “I think they are beginning to understand that they need to come together at the political peak.” Biden pledged that the United States would continue to support the Afghan security forces, both financially and militarily. Every day the situation is reported to him. Aiming to withdraw the American soldiers he ordered, the president added: “But I do not regret my decision.”

By the end, the United States still had 2,500 troops in Afghanistan. According to the military, the withdrawal is now more than 95 percent complete. It will be fully completed by the end of the month. Soldiers from the Bundeswehr and other NATO countries have already left Afghanistan.

Since the withdrawal of international troops in early May, the Taliban have seized several territories. On Tuesday they captured the eighth consecutive provincial capital. According to initially unconfirmed reports, the city of Faizabad is said to have fallen into the hands of Islamists in the evening. Earlier, the city of Bull-i-Sumri, home to 250,000 people in the northern province of Baghlan, had already paid a lot of money to Islamists, three provincial councils of the DPA news agency confirmed in the evening. The land route between the capital, Kabul, and the northern city of Mazar-i-Sharif is now cut off.

Government forces left the city on Tuesday evening (local time), according to provincial councilor Frusuddin Imak. Several generals and other officials had already announced that they would leave Bull-e-Sumri ten or 15 days ago and attack the Islamists from another route. The remaining troops would have been on the offensive for a few more days, but have now returned to a military base outside.

Bull-i-Sumri is located on an important landscape road between Kabul and Masar-i-Sharif, where Bundeswar was until recently. It is the second largest city in the Northeast after Kunduz. International forces have been withdrawing from Afghanistan since early May.