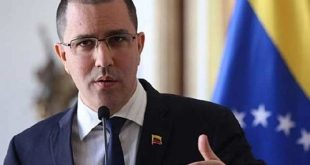 Faced with continued pressure from the US government to intervene in the country’s political affairs, Secretary of State Jorge Arizza on Monday approved Venezuela’s sovereignty and self-determination policies.

In a message posted on the social networking site Twitter, Arresa rejected reports by US official Juan Gonzalez, a special adviser to President Joe Biden, on the possibility of pressuring South America to hold “free and fair elections.”

Biden’s advisers (Donald) did not learn from Trump’s defeat in Venezuela. They do not understand that we are a free people who are not subject to anyone’s pressure, ” the foreign minister wrote on the communications site.

The Venezuelan foreign minister stressed that there were “free and fair elections” in his country, while “the United States is skeptical about it.”

Venezuela is holding elections on November 21 to elect the country’s 23 governors and 335 mayors and members of regional legislative councils and municipal councils.

The renewal of the National Electoral Council and its call for elections are part of the agreements on the National Dialogue Schedule established in September 2019 between the Nicolas Maduro government and various opposition parties.