Home World 3 days of rain equals one year, flooding in China ‘once in a thousand years’ 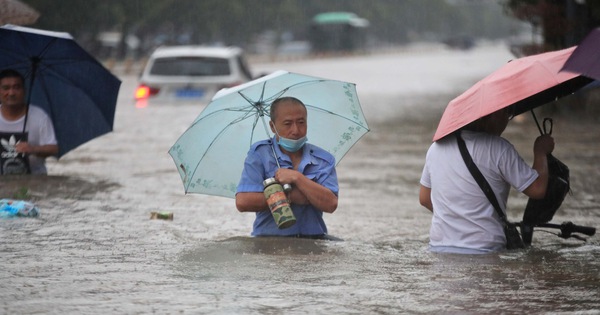 “The water rose in my chest, I was very scared, but the scary thing was not the water, but the oxygen in the train car ran out and it was even harder to breathe” – wrote a Chinese person about the horrible experience in a car submerged in a tramp in Zhengzhou.

Videos on social media showed subway cars in Zhengzhou, the capital of Henan province, flooded by up to a third, reaching the waist of several tall passengers, some of whom had to stand in chairs, while others were holding handrails.

Water was rushing under the tram tracks and at the train station. Hundreds of passengers were rescued from the roof one by one by rescuers.

Ha Naam province, with a population of 94 million, has been hit by heavy rains, causing several dams to crack and rivers to burst, causing extreme weather warnings.

Earlier, between July 17 and the end of July 20, the city of Zhengzhou, which has a population of more than 10 million, received 617.1 mm of rain. Rain for three days but the average annual rainfall in this place is 640.8 mm.

Unusually heavy rains turned the lives of millions of people in Ha Nam upside down. Some rivers rise rapidly along the Yellow River bed. Roads in dozens of riverside cities were flooded.

Of further concern, the water level in 16 irrigation reservoirs was dangerously high. Flood-damaged crops and farm produce are estimated at up to $ 11 million. Train services were suspended and flights were canceled. Many schools and hospitals were isolated due to the floods. Since July 20, many children have reportedly been trapped in kindergarten.

The People’s Daily reports that Zhengzhou Hospital, which has more than 7,000 beds, has completely lost power, and even the backup power has been cut, thus finding a way to transfer the hospital’s 600 critically ill patients to other facilities. The loss of life and property is expected to be very heavy.

On the night of July 7, the Henan government announced that heavy rain and water had caused a 20-meter crack in the Yihetan Dam in Luang, west of Zhengzhou, which has a population of about 7 million. The dam is in danger of “breaking at any moment” and the river bank is threatened. There are also cracks in the Gujiajui Irrigation Lake.

Flooding during the rainy season disrupts life, damaging crops and homes in China, and has worsened over the past few decades. There are many reasons for this extreme weather event. Climate change and human intervention could be the main trigger for record-breaking, heavy rains causing severe flooding in many places.

In terms of human causes, according to Channel News Asia, land use change due to the growth of cities has increased the cost of flood damage.

Extensive construction of dams and banks has cut off communication between rivers and neighboring lake systems, thus changing natural conditions in floodplains. These rivers and lake systems function naturally to absorb rainwater during the summer.

The other reason is climate change. Although no scientist has confirmed that specific serious natural disasters are caused directly by climate change, the fact remains that global warming is increasing the frequency and intensity of extreme weather events. The United Nations Climate Change Commission (IPCC) has warned.

See also  Leader of the American Personnel in Latvia to promise

Regarding the long-term solution, Chinese President Xi Jinping asked the authorities to find problems to deal with the floods more effectively. In particular, improving the early warning and forecasting system for natural disasters such as rain, storms, hurricanes, landslides …, and locating drainage areas while accelerating efforts to manage traffic and implement flood prevention measures.

Furthermore, China should invest in goals that mitigate the effects of climate change, namely reducing emissions. Recently, according to the BBC, US Climate Ambassador John Kerry called on China to accelerate and quantify efforts to reduce CO emissions.2.

China has pledged to reduce emissions by 2030, but as the largest driver of climate change, this goal is not yet sufficient.

If China does not reduce emissions sufficiently, the global goal (temporarily defined as 1850-1900) is to keep temperatures below 1.5 degrees Celsius by 2100 over pre-industrial times. “Basically Impossible”.

The earth has already risen 1.2 degrees Celsius and has seen catastrophic consequences, including the recent floods that killed nearly 200 people in Europe and unusually hot weather in North America. Over the next 10 years China may be more ambitious with its self-proposed goals, and of course other economies as well.

On July 21, Xinhua announced that Chinese President Xi Jinping had confirmed that the flood situation in Henan province was “extremely serious” and that flood control measures were “at a critical juncture.”

G urged the authorities at all levels to give priority to ensuring the safety and property of the people and to implement careful and serious measures for flood prevention and disaster relief.

Meteorologists say this is the heaviest rainfall in Henan province since data was recorded 60 years ago, a rare event that only occurs once every 1,000 years. The army was stopped to take part in the emergency response to regulate the flood.

Twelve people have been killed in floods in the China Trunk

TTO – Chinese President Xi Jinping has ordered governments at all levels to prioritize ensuring the lives and property of the people after the July 21 floods that killed 12 people in Henan province.