Home Top News United States / Paraguay – “We Are All Outgoing Missionary Disciples”: Creation for Men and Women Religious and Priestly 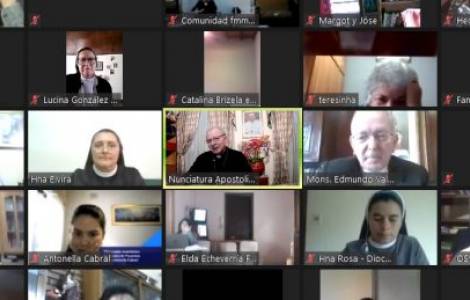 United States / Paraguay – “We Are All Outgoing Missionary Disciples”: Creation for Men and Women Religious and Priestly

Asuncion (Agency Fights) – The Conference of the Paraguayan Religion (CONFEREPAR) begins on Tuesday, July 13 and ends today, Thursday, July 15, with the slogan “We Are All Outgoing Missionary Disciples”. The theme chosen is “The Process of Hearing by the Preaching Council of Latin America and the Caribbean”. The main themes of this week’s 62nd edition are: Bringing the National Health Situation into Perspective (Health, Economic, Political and Preaching Dimensions); Animation of the hearing process of the Preaching Council of Latin America and the Caribbean; Pastoral letter from the Bishops of Paraguay regarding Appendix C of the Itaip Treaty.
Instead, priests from across the country will meet in virtual form from July 19 to 22 for the creation and reunion of traditional “national days”. On Monday the 19th, they will conduct an analysis of the national situation in the context of the epidemic, the economic situation and its impact on society. They will then do team work to identify and discuss issues. On Tuesday the 20th, the theme will be “Amendment C of the Conciliation Agreement”, followed by a brief summary of the socio-political conditions of the country by Father Gustavo Benades, the executive secretary of the clergy. On Wednesdays 21st and 22nd Thursday, questions related to continuing education and the continuing challenges of the gospel will be resolved.
According to the church’s latest statistical yearbook, 418 diocesan priests and 478 religious, 1,164 religious and 315 nuns are not priests in Paraguay. The population is 7,153,000, of whom 6,766,000 are Catholics. (SL) (Agency Fights 07/15/2021)

See also  Immigrants: London calls on France to strengthen its routes along the coast