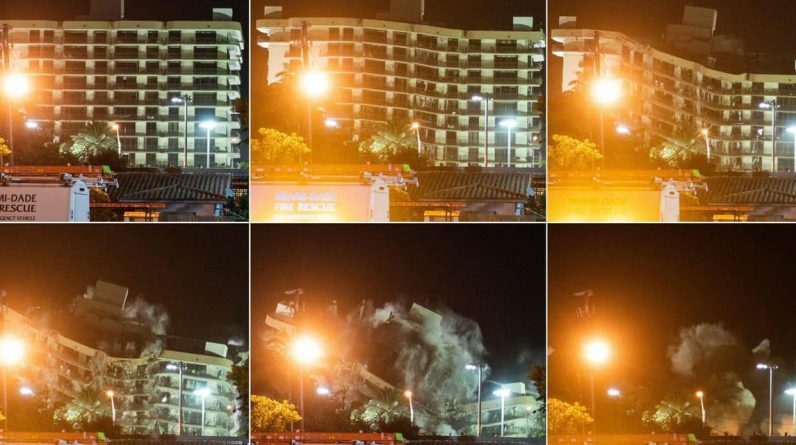 The search for victims was suspended on Saturday in preparation for the demolition, while 24 people were killed and 121 were missing.

According to television footage, the controlled explosion occurred just after 10:30 pm local (02:30 GMT).

Most of the building, dubbed the Sampline Towers South, one of the worst urban disasters in U.S. history, collapsed in a cloud of dust at midnight on June 24.

Authorities feared the remaining building would collapse, threatening the safety of those rescued. These fears were heightened by the arrival of tropical storm Elsa, which is expected Tuesday in Florida.

Miami-Date County Mayor Daniel Levine warned Sunday at a news conference that “the demolition itself is limited to the immediate perimeter of the building.”

“However, there is dust and other particles that are an inevitable result of knocking down any space, and as a precaution we invite nearby residents to stay indoors,” he added.

“Destroying this building, a storm is coming. We have to do it anyway. It’s prudent,” Florida Governor Ron Desantis said Saturday.

According to the district mayor, it was “necessary to bring down the building in a controlled manner” to expand the search operations because the teams could not go further because of the risk of further collapse.

On Thursday, President Joe Biden and his wife traveled to Florida to comfort families by improving the memorial wall over the wire mesh, covered with photos of the victims and adorned with missing persons, flowers and candles.

One survivor – a young man – was rescued from the rubble early in the morning of relief efforts. Rescuers were mobilized from across the United States, even from Israel and Mexico, but no one else was found.

The missing include dozens of Latin Americans from Argentina, Colombia, Paraguay, Chile and Uruguay.

If the hypothesis of failure in the maintenance of the building is raised, no clear answer is given.

“We have no conclusive evidence of what happened,” Joe Biden said Thursday, referring to the “series of questions.”

Among them, the President raised questions about the maintenance and construction of the building, nearby construction work, and rising water levels.

According to documents released by the city of Surface, an early 2018 report listed “major structural damage”, as well as “cracks” in the basement of the building.