Home World The Kremlin called the incident a provocation with a British destroyer, promising a backlash if it returned. 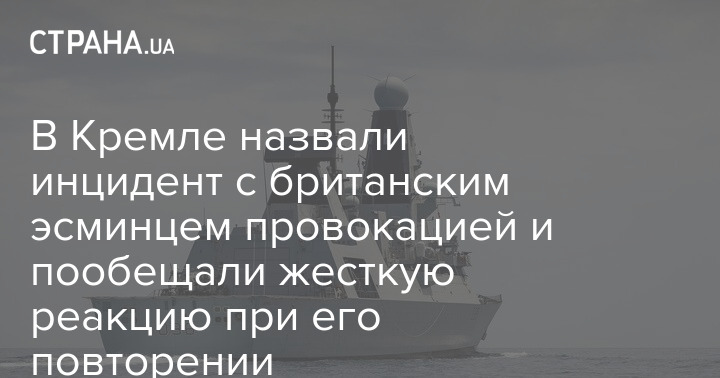 According to a Kremlin spokesman, Britain is “exploring” weaknesses in the Russian surveillance system. Image credit Flickr

The Kremlin views the incident with a British destroyer on the coast of Russia-annexed Crimea as a “well-planned provocation” with the help of which the UK Armed Forces “explored obstacles” in the surveillance system on the peninsula. If such a situation occurs again, the reaction of the Russian Federation will be severe.

This was stated by the press secretary of Russian President Dmitry Peskov in an interview with Vladimir Solovyov at his studio in Moscow. Kremlin. Putin’s plan, according to RIA Novosti.

“In this case, the destroyer is a provocative tool. The president explained that this is an exploration of some of the obstacles and weaknesses in the system for monitoring the integrity of the border, the response method and so on. This is a deliberate, well – planned provocation,” Peskov said.

Speaking of the reaction of the Russian Federation when a similar situation occurs again, he was not a supporter to discuss such doomsday scenes, but it was clear that the reaction would be difficult.

At the same time, the British Military Department said that no warning had been issued for a distraction off the coast of Crimea occupied by the Russian military alliance.

At the same time, he said that the Russian Foreign Ministry was ready to defend its borders not only politically and diplomatically, but also militarily.

Later, the British embassy said that the British destroyer had made a peaceful route through the territorial waters of Ukraine, subject to international destruction.