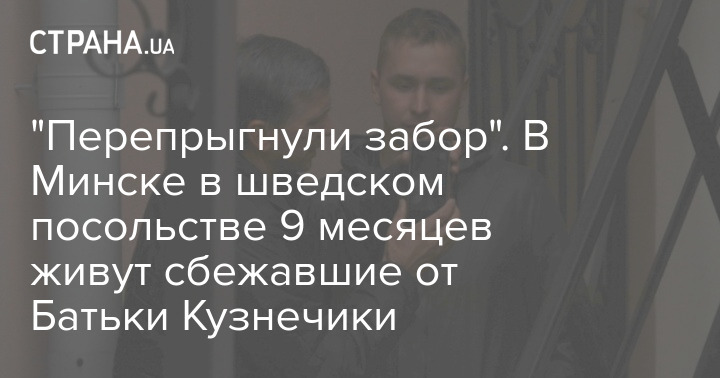 Locusts live for 9 months in the Swedish embassy. Photo: Svoboda.org

Residents of Vitebsk, Vitaly and Vladislav Kuznetsov, have been living at the Swedish embassy in Minsk for 9 months. They came there to seek political asylum, but when they were not opened, they jumped over the fence.

The version writes about it “Current Time”.

According to the locusts, they feel safe in the territory of the embassy. They got a room with beds, bathroom, toilet, washing machine, microwave. They make their own food. “The main problem we have is that my father and I need a medical examination. I have cancer,” Vladislav said. “My father also had a problem here – he had severe abdominal pain. He didn’t eat anything last week, he had a fever”.

Attorney Vadim Trostov asked the Swedish embassy to provide doctors for the locusts, writes “the present time.” “By law, Sweden has no jurisdiction over your clients, beyond the temporary action specified by the Committee against Torture in Medical Care Requested,” they replied. “In fact, the Swedish embassy in Minsk cannot provide the medical care your customers need.”

Let us remind you that Belarus has previously been reported to have tightened criminal liability for 70 types of crimes.

We also wrote that participants in the August riots who tried to escape to the European Union were detained in Belarus on the Lithuanian border.

See also  Countries where the 'Govt Passport' was introduced