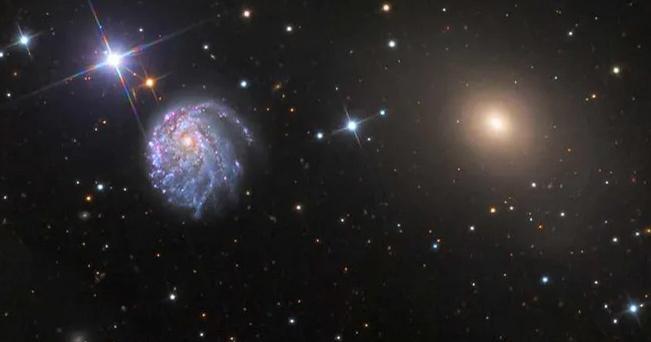 The distinctive galaxy was discovered by the Hubble Space Telescope. Photo: NASA

The unique distant galaxy NGC 2276 was discovered by the Hubble Space Telescope in the Cepheus galaxy about 120 million light-years away.

The shape of this galaxy is very strange because it was created due to a powerful gravitational influence. In general, this galaxy is on the list of the largest wonders of the universe. The photo also shows a neighboring galaxy NGC2300. This was reported by NASA.

Astronomers note that the neighboring galaxy NGC2300 has gravitational influence on one edge of NGC2276, pulling its spiral arms out. Due to this, the galaxy has an asymmetrical appearance.

The European Space Agency has suggested that the film shows incredibly hot gas, with stars actively forming in the clouds. They are found at the left edge of the galaxy, where the blue lights are visible.

Recall that in April the Hubble Space Telescope was able to fix a photo A large cluster of galaxies Abel 2813. He was able to reflect the scattering process of light as it passed through clusters of galaxies located in China’s galaxy. The same effect of gravitational lensing can be seen in photography, when the mass of the object leads to the distortion of the light wave.