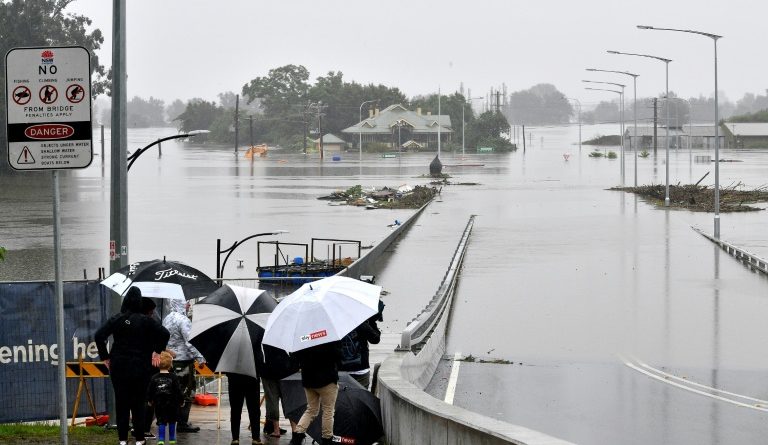 Rory Kirkland, 17, has been living in Australia for just three years, but has already suffered a devastating wildfire, and his home is now threatened by flooding on the east coast of the largest island-continent.

The Hawksbury River rises from its bed, passing through valleys and fertile farmland from the east coast to the South Pacific.

“This is my garden,” Rory laments, wearing rain boots, pointing to the reeds of grass and trees that have turned into a vast lake of muddy water.

“This tree is about eight meters tall. You can see that it is only 30 cm high. The water has risen above.”

Australians are well aware that global warming exposes them to frequent and intense weather events. But very few, in recent years, can predict that the massive island-continent will be affected by such disasters.

The young man has been living in Windsor, northwest Sydney, for three years.

During months of wildfires in the Sydney region in 2019 and 2020, five million people in Australia’s most populous city were surrounded by clouds of smoke and ash for weeks.

However, this flood was not unexpected. Scientists say the warmer climate retains more moisture, so rainfall is expected to increase by about 7% as temperatures rise by one degree due to global warming.

“The valley has been flooded since the early years of the British occupation two centuries ago,” said Jamie Pittock, an environmentalist at the Australian National University.

“Now climate change is likely to increase the frequency of these dangerous floods.”

After several years of drought, parts of eastern Australia received days equal to about a year of rainfall.

From his home, located on a small hillside, Rory filmed the rising water. It started with small streams that took over the land until the vast expanse of brown water.

So the family left at night, but returned when they learned that the electricity would not be cut off.

Even if the rainfall calms down and the water level drops slightly, the new rise in water levels cannot be ruled out in the coming days.

“Nearly a meter of water came from our front door. If it rises today, it may reach our door,” he fears.

His neighbors were unlucky and they lost the ground floor of the house and were forced to flee.

While waiting for the water to recede and clean-up operations begin, Australians are trying to use this new nature, which causes a worrying frequency of “events that only happen once a year”.