Islamabad
Former President of Pakistan Pervez Musharraf’s latest film has been released in which his condition is deplorable. He sits in a wheelchair and is very weak. Sharing the photo, all parties prayed that the Muslim League would get Musharraf well soon, but the people of Pakistan are expressing anger at him on Twitter. Musharraf is not the hero of Pakistan, but he says he sold the country into the hands of the United States and today he is reaping what he has sown.

ABML shared a picture of Musharraf and wrote- ‘We ask you all to pray for Musharraf’s health.’ Now this tweet has been deleted, but Musharraf was a minister in the government and now the country’s science minister Chaudhry Fawad Hussain has also shared Musharraf’s picture. He wrote- ‘Good health to you, President. It’s nice to see you laugh. You have fought for Pakistan all your life. Prayers and congratulations to you. ‘

Angry Pakistanis – ‘not a hero, dictator’
However, many of the general population of Pakistan do not accept this. One user wrote on Twitter – ‘Can we fight for Pakistan? By calling on foreign powers to drop bombs and abduct civilians, including women? Which soldier invites foreign forces on his soil to do this to his citizens? Only a dictator can do this. ‘

Someone wrote that Musharraf had sent thugs to torture the Chief Justice of Pakistan, and then someone reminded him that Musharraf, along with the Muttahida Qaumi Movement, had accused Prime Minister Imran Khan of plotting to kill 48 people in Karachi. At the same time, people accused Musharraf of ‘selling Pakistan to the US in dollars’.

People are also coming to the rescue
Meanwhile, Musharraf has been described by many as Desa’s hero and criticized for such behavior. At the same time, many say that a person who loses health in old age should not be targeted in this way. One user wrote that time like this can come in front of anyone and there should be no hatred against anyone to this extent. 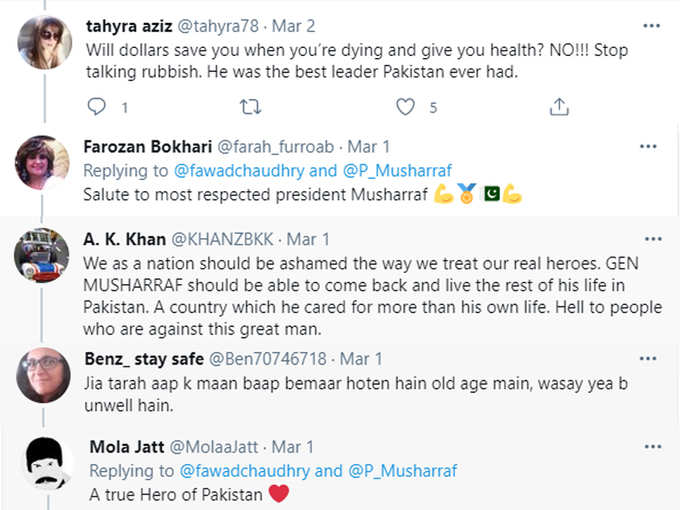 The country accused of treason did not return
Retired General Pervez Musharraf served as the country’s president from 2001 to 2008. He became the country’s 10th president after the 1999 coup. He resigned in 2008 to avoid charges. Musharraf was sentenced to death by a special court on December 17, 2019 in a treason case. The PML-N government filed a treason case against Musharraf in 2007 over its decision to impose a non-constitutional emergency. In 2016, he went to Dubai for treatment but did not return to Pakistan.