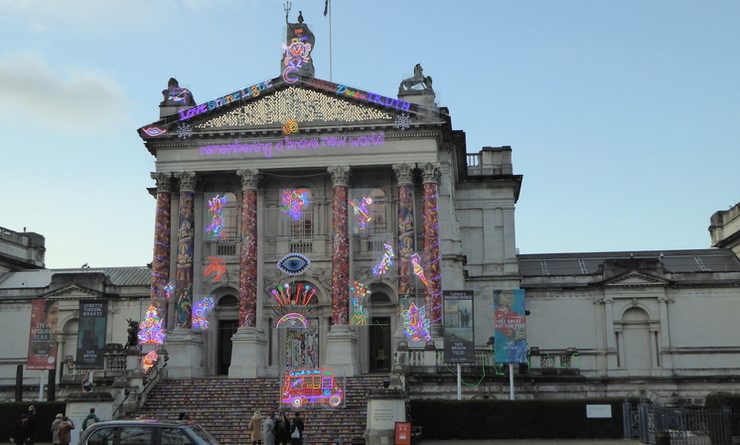 Art is unstoppable! Despite her imprisonment, Sila Kumari Burman’s work illuminates the closed doors of Tate Britain and celebrates cultural traditions. The real ray of sunlight.

For the past four years, Tate Britain has assigned a job to decorate its facade during the long, dark winter months from November to January each year. This year, despite the imprisonment, the installation was very rainy and it was extended to a month, so it will be until the end of February. So you get more chance to find it.

Dr. Chila Kumari Singh Burman, a Liverpool-born feminist artist and activist, received an honorary doctorate from the University of the Arts in London for her contribution to British art. He was a key figure in the Black British art movement that began in the 1980s. An artistic and political movement that was inspired by racist and feminist discourse and later sought to highlight issues of race and gender in representations.

He specializes in mixed and highly colorful techniques. This work is no exception, it is made up of printed patterns and multi-colored incandescent neon lights.

Tate celebrates Indian and South Asian culture in the UK

71 years after Indian independence, This work is designed Celebrate Deepavali. Launched in the UK in November, Tate coincided with the Hindu Light Festival. It celebrates victory over evil and good over new beginnings, which is a welcome celebration in Govt time.

In the many glowing statues and galleries, we can identify the third eye of Indian culture, Hindu deities like Lakshmi, the goddess of wealth and purity, and Ganesh, the god of prosperity, and Anumana, the monkey god.

Thousands of rangoli steps adorn a visual creation on the floor that is ubiquitous in Asia. A scene to admire day and night and countless details!

The artist also drew on his experience coming from a working class family in Liverpool to explore South Asian identities in Britain today. The ice cream truck on the front is inspired by his parents. And some elements are reminiscent of Blackpool festival lights.

This installation exemplifies feminine figures and symbols of freedom, such as “Queen de Jhansi”, a warrior who fought against the British in 1857. The image of Britannia is also one with Kali, the Hindu goddess of liberation and power.

The words “love”, “light” and “truth” are scattered throughout the work, and its name, “Remembering a Brave New World” is no doubt written in bright neon lights in the center of the fa :ade: the words that guide passers-by. With. More than a ray of hope, it is a cheerful and glowing tribute that warms hearts, especially in the cold and gloomy winter.

So as not to miss anything in the London news, Subscribe to our newsletter in two clicks !