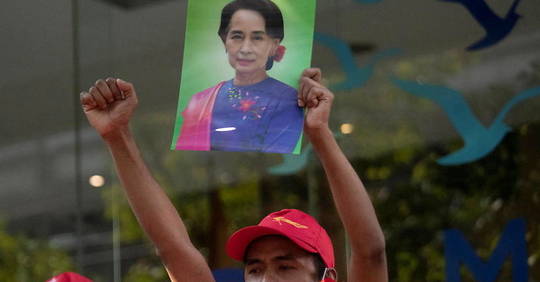 Come Burmese no longer have Facebook access. On Thursday, February 4, three days after the overthrow of Aung San Suu Kyi’s civilian government, the social network said some of its services in the Southeast Asian country had been “disrupted.” “We see that access to Facebook is currently restricted to some,” a US agency spokesman told Agence France-Presse.

“We urge the authorities to re-establish this link so that residents can communicate with their family and friends and access important information,” he added. Facebook is very popular in Burma where this social network is the main communication medium. It is often used by government departments to publish press releases.

NetBlogs, an NGO that monitors Internet shutdowns around the world, blocks or restricts access to providers in Facebook, Instagram, and WhatsApp in Burma, the latter two being owned by Facebook. “Facebook’s services are currently blocked by several Internet providers in Burma, and operators are complying with an explicit restraining order,” NetBlogs wrote on Twitter. According to the NGO, the state-owned Internet service provider MPD took the most comprehensive preventive measures.

The Norwegian company Telner, one of the country’s leading telecommunications providers, has confirmed that authorities have issued an order to “temporarily block” Facebook. We were forced to reduce, but the company added that “we do not believe this action (…) is subject to international law.” Military officials have already advised people not to say or publish anything that “promotes unrest or unrest.”

On Monday, the military abruptly ended the country’s weak democratic transition, declaring a state of emergency for a year and arresting Aung San Suu Kyi and other officials of her party, the National League for Democracy (LND). The 75-year-old leader is said to be under house arrest in the capital, Nairobi, on charges of violating an ambiguous trade rule, according to his motion.

Fear of revenge is of interest in the country, which has been living under the yoke of military dictatorship for almost fifty years since independence in 1948. But it has strongly condemned the UN and called on the international community to unite and defeat it. On Wednesday evening, in the business district of Yangon, the economic capital, locals paid homage to their horns and banged their heads in pots for the second consecutive evening, with some chanting “Long-lived Thai Sue!” (Aung San Suu Kyi).

Health professionals took the lead in this struggle, with dozens of companies across the country refusing to work “under illegal military authority”. Some protested wearing red ribbons in the colors of the NLD, while others saluted with three fingers, a gesture of protest already accepted by pro-democracy activists in Hong Kong or Thailand. Groups calling it a “violation of the law” have also sprouted up on Facebook.