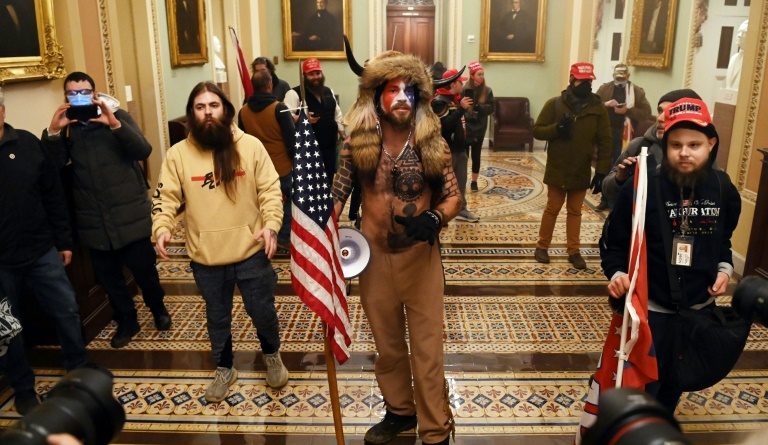 Can a man wearing a fur hat really be a Sahelian hunter? Should peacekeepers intervene in Washington? The pro-Trump protesters’ invasion of the Capitol on Wednesday has provoked controversy across Africa, which has become accustomed to learning American lessons in democracy.

In Mali, the general secretary of an armed group, Bahadur al-Mahmoud, “condemned” the presence of traditional hunters in the capital on Thursday evening.

Sahel is currently and is sometimes accused of being abused by wearing a “dosos” brown dress and grinning: a man with a long fur hat and a naked torso needs nothing more than this. , Who proudly posed in front of the cameras in the invading Capitol, is one of the Internet users.

“Our cousins ​​American dosos are not on the sidelines of this historical fact”, a Burkina Faso Internet user greets inconsistently with a photo of a crazy person.

On the African continent, which was rocked by waves of crisis last year, from the crisis in Mali to the uprisings in the Central African Republic, including the election crises in Guinea-Bissau, Guinea or even Cote d’Ivoire, we have not lost sight of the joy provided by the United States.

“What happened on Capitol Hill shows that Americans are finally realizing the value of Africa and copying its post-election practices,” one Malagasy tweeter jokes.

“If this were the case in Africa or the DRC, I imagine the headlines on the front page of RFI, France 24, CNN (…),” Gostenfils Lonzo commented on Twitter. Investigators will already be sent. “

“We must stop saying that there are only Africans who do not want democracy. We have proof that refusing to step down after an election defeat is not the exclusive prerogative of Africans,” said Bienwenu Madumo, a member of the Fight for Change (Lucha) civic movement.

“What has happened is that, regardless of human nature, color or appearance, protections are needed: education, strong institutions, responsible leadership, must have its primary instincts,” says coordinator Floribert Ansuluni from another association, Philippi.

In his editorial on the Jean-African newspaper website, Franco-Burkinabe cartoonist Damien Glace compares Donald Trump to former Cambodian dictator Yahya Jammeh, who refused to step down when he lost the 2017 presidential election.

When the outgoing US President was treated during the command of the “disgraceful nations” of Africa, one publication was sadly recalled, the cartoonist being cowardly: “We are often like we wipe out”.

Unlike some European leaders who quickly condemned Capitol’s historical vision, the leaders of the African continent were not in a hurry to react.

Only Zimbabwean President Emerson Manangagwa did so on Twitter, taking the opportunity to call for the lifting of US sanctions on his country: “Yesterday’s events show that the United States has no right to punish another nation on the pretext of defending democracy.

The United States has maintained sanctions against nearly 100 Zimbabwean individuals and law firms, including the current president, for nearly two decades in response to bloody repression of the enemy.

Some Internet users are calling on the African Union to react “like the United Nations” to unrest in African countries.

In the Guinean daily Le Dijeli, journalist BBK Sancho Barry concludes about Africa that “we must break these hasty and somewhat racist judgments.”

See also  Trump backtracks on UN experts: "Forgiveness of Blackwater employees is a disgrace to justice"