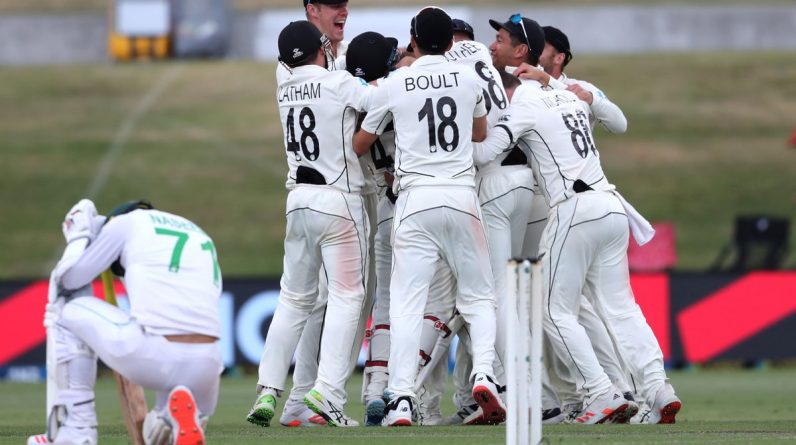 The Black Caps topped the list for the first time after Pakistan’s stunning collapse in the final session of the first Test.

It took 71 runs for three runs to continue with 373 runs to win, the spectators lost only one wicket in two and a half sessions, trailing by 240 runs for four wickets in the last session and leading 25 left.

Fawad Alam, who led his 21 nights to a stunning 102, had a crucial chance for a fifth-wicket partnership of 165 off 63 accurate passes – captain Mohammad Rizwan, who compiled 60 balls. In 191.

But when fast bowler Kyle Jamieson finally caught Rizwan in the LPW, it sparked an explosion in which Pakistan lost the last six wickets for 31 points in 21.3 overs, eventually scoring 271 for 101 as New Zealand won.

Alam was dismissed three times after the captain was caught behind middle-order fast bowler Neil Wager after nearly five hours in the folds, after which Pakistan’s tail fainted, with Noah’s first five bowlers — Zealand ending with two wickets each.

Not only did New Zealand take a 1-0 lead in the two-match series, but they also earned enough ranking points to beat their neighbor Asia from the top of the ICC Test stages.

The Black Caps believed they had at least a first-place finish at the start of this summer after a series win over the West Indies, but a clarification from the ICC has kept them in second place by tightening the margins.

New Zealand have the opportunity to improve their position in the second Test from January 2, while Australia have two more Tests from the current domestic series against India, currently 1-1.

Captain Kane Williamson, who misjudged the man of the match for his 129 runs after New Zealand were batted, praised the determination and perseverance of his bowlers.

“The bowlers had a great effort to get past us, but a lot of credit goes to Pakistan for the way they fought in this second round,” he said.

“For all the money, it will be a draw until the end of the play.

“When we were against a very tough team, we were in good luck as a result.”

Additional statements of the PA.