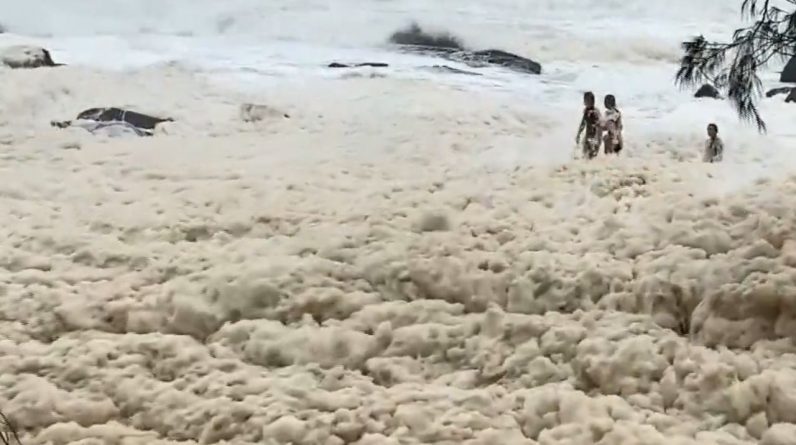 Large pools of sea foam have formed on the east coastAustralia, Mainly in the Gold Coast region, near the borders of the states of Queensland and New South Wales, A weekend for extreme weather.

Many locals came to appreciate the show and had fun In large piles of thick white foam brought by the waves It is concentrated on the beach. A brief moment of distraction after a bad weather weekend.

Between the end of last week and the beginning of this week, most of the coast of southern Queensland and northern New South Wales Affected by heavy rain, high winds and strong waves. This bad weather between these two states was due to a low pressure system. Some cities are crowded About 1000 mm of rain in just 4 days!

Apart from rain, several places have been recorded The wind is blowing at 100 km per hour! Due to the hurricane cycle of the system, this strong wind was perpendicular to the beach, forming large waves and reaching a height of 8 meters Byron Bay, New South Wales. Significant landslides have been reported.

When the bad weather at the beginning of the week gave them some respite, many took advantage of the situation and had fun amidst all the foam that had accumulated. A family is terrified when a dog walks through the moss and gets lost. Fortunately, its owner was able to find it, but the event acts as a precaution, as the foam is harmless and it is able to cover the progress of the sea, rocks and other objects.

How is sea foam formed?

Seawater contains many types of particles, such as dissolved salts, algae, microorganisms, phytoplankton, proteins, animal fats, as well as anthropogenic contaminants such as soap and water. If you put seawater in a glass and stir well, you will find that a small foam forms. This foam is the result of the interaction of water, air and particles in the water.

Thus, when there is a strong turbulence at sea due to the action of extreme weather systems, Foam forms in large quantities and accumulates in the ribs. Like Australia’s east coast, low pressure and strong winds perpendicular to the coast caused strong sea turbulence, which produced large amounts of foam.

Mostly, this sea foam Does not harm humans, Because it is mostly made of organic materials. However, In areas close to wastewater or wastewater disposal or in areas where algae are abundant This foam can cause some ailments ranging from skin irritation to poisoning and other health problems.