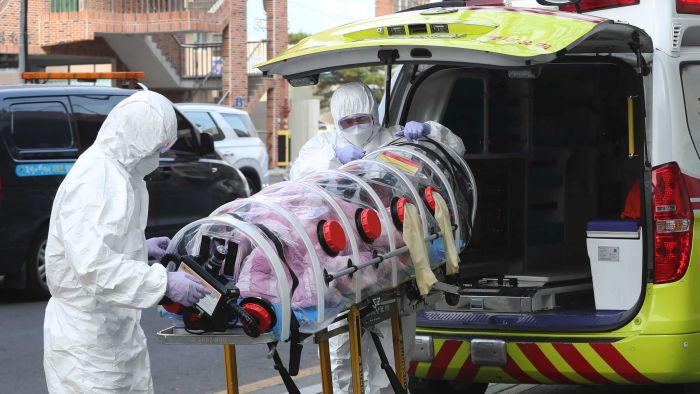 South Korea has declared the worst weekend for COVID-19 infections since the outbreak, with President Moon Jae-in calling the country’s third wave an emergency.

This week, the health minister described the capital, Seoul, as a “Covid 19 war zone.”

On Sunday, South Korea recorded 1,030 new corona virus infections, breaking the previous day’s record of 950 and bringing the total number of infections to 42,766 with 580 deaths.

The previous highest single-day count was 909 and came in late February.

Mr Moon warned on Sunday that COVID-19 restrictions could be raised to record highs in the wake of the record rise.

Of the new cases, 1,002 have spread domestically, according to the Korea Institute for Disease Control and Prevention.

“Our back is against the wall,” Mr Moon said.

“This is an important moment to dedicate our virus control skills and management to prevent the spread of corona virus.”

Check out the top COVID-19 news from December 13 on our Corona Virus blog.

South Korea faces the prospect of a first lockout

On Saturday, Mr Moon ordered police, soldiers and general practitioners to mobilize, calling it an “emergency”.

Mr Moon, who chaired an emergency meeting at the Federal Disaster and Security Counter Headquarters for the first time since February, stressed the need for vigilance and called for all efforts to control the virus.

“If the eruption cannot be contained now, it has come to the critical stage of considering increasing socio-distance activities. [next] Condition, “he said.

Greater Seoul, home to half of South Korea’s 52 million people, is under Level 2.5 restrictions.

It is currently prohibited to add more than 50 people and restaurants are prohibited from serving customers after 9:00 pm.

Level 3 restrictions would mean a lockout for the first time in Asia’s fourth largest economy.

Schools will become remote learning, companies will only allow essential workers in offices and meetings of more than 10 people will be banned.

Over the next few weeks, the government will add about 10,000 hospital beds and pay an additional $ 3 million ($ 3,646) a month to temporarily help some of the nurses involved in the care of COVID-19 patients at high-stress hospitals across the country.

“Assuming there are about 1,000 new daily infections in the next 20 days, we will protect more than 10,000 beds in the next three weeks,” Health Minister Park Nung-hoo told a television conference after the emergency meeting.

After the country’s first case was confirmed in January, South Korea hailed its initial success in having the corona virus without locking, relying heavily on contact-tracking and testing.