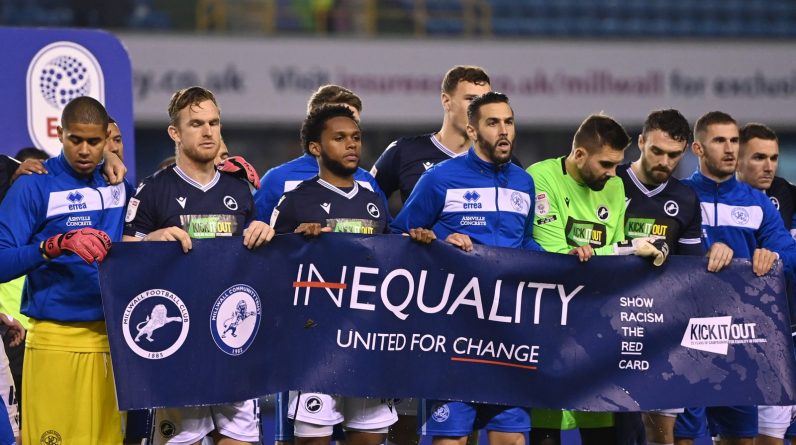 Before Tuesday night’s game against QBR, the Millwall players held a discussion in the changing room, where they agreed as a team that no one would get on their knees before the kick-off.

A source inside the dynamic room said Sky Sports News That said – although the team has been told about the club’s plans for a different show of unity – they are adamant that there is no pressure from the club’s bosses, and the players are left to choose their own choice as to whether to take the knee. Or not.

It has become part of the Match Day protocol to inform the referee in making a game whether each team plans to take a knee.

This suggests a clear change of heart from the previous day, when Sky Sports News Most of the Millwall team was said to be planning to take the knee.

Instead, the entire Millwall team stood, while Marlon Romeo raised his fist in a salute to the black force, after joining the opposition and displaying an equality banner.

The entire QPR team and tournament officials took to their knees – but unlike Saturday’s game against Derby – there was only applause from the home crowd.

Millwall now plans to continue their own campaign against racism and inequality before the Games, and will ask each opposing team to join them in assembling weapons and displaying an anti-racism banner.

Millwall fans applauded as QBR players advanced to their knees ahead of Tuesday night’s championship match at The Ten.

In contrast to Saturday’s game against Derby, no booze was heard as QPR players and match officials got on their knees. Millwall’s Mahlon Romeo raised his fist, but no players wanted to get on their knees from the home side.

The two sets combined arms and held up a banner reading ‘Inequality’ with ‘In’ as a display of solidarity against racism and other social injustices.

Bandari was happy with Millwall’s support

Millwall wore the Kick It Out logo on their match day shirts instead of one of their main supporters, and Bandari was pleased with the support shown by the championship club.

“Probably like the rest of the world we were all breathless, hoping the fans would appreciate what was happening on the pitch,” he said.

“It may be a different message to what other clubs are using, it may be different to get on their knees, but in the end they have all the clubs behind them. They’ve got fans and players, and most importantly the players were a part of it.

“What we wanted to build was the ability to resist in a way that players could feel comfortable and free from the risk of allowing.”

Bandari added: “QBR did not take a knee, but decided last night. It was a free choice. What I’m focusing on is that it created some synchronicity and unity, in fact we’m just behind.”