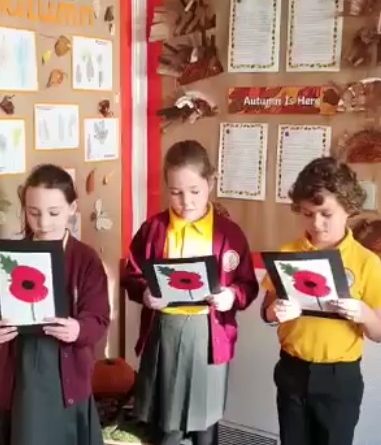 The importance of remembering those who served their country was not lost on Whitehaven’s children.

Young people at St. James Infant School have been thinking for the past two weeks about who paid the final price on Final Sunday Memorial Day.

As part of their study, children at the children’s school are creating poppies to learn about what they represent and why we wear them.

The infants learned a poem called Poppy, Poppy, and wrote their own acrostic poem about the act of remembrance.

The children have drawn a giant poppy using their fingerprints as a token of their collective gratitude to the soldiers who fought for their country and often made the final sacrifice.

Children also read the poem In Flanders Fields by John McRae. Their studies of Rondio poetry and the conditions in the trenches brought home the realities of war.

Teacher Rachel Morgan said: “Children learned about Memorial Day and why we remember it.

“They could not believe the conditions under which the soldiers had to live, and we are very grateful to the men and women who fought to defend our country.”

Hetticher Michael Craig said: “It seems that children and parents are really attached to it.

“We are learning the meaning of remembering.”

St. James Infant School is scheduled to observe a two-minute silence today at 11 a.m. on the 11th day of the 11-minute month. A virtual memory service including poetry readings, information and clips of their activities will be released by the school today.

This year is a very different Memorial Sunday, due to an epidemic with services at monuments without public participation. However, schools like St. James recalled falling apart from all conflicts. On Sunday the nation reflected silence on their windows or doorsteps, while dignitaries dressed for the evening at The Cemetery in private ceremonies.

For more information on Memorial Sunday, return to page 8.