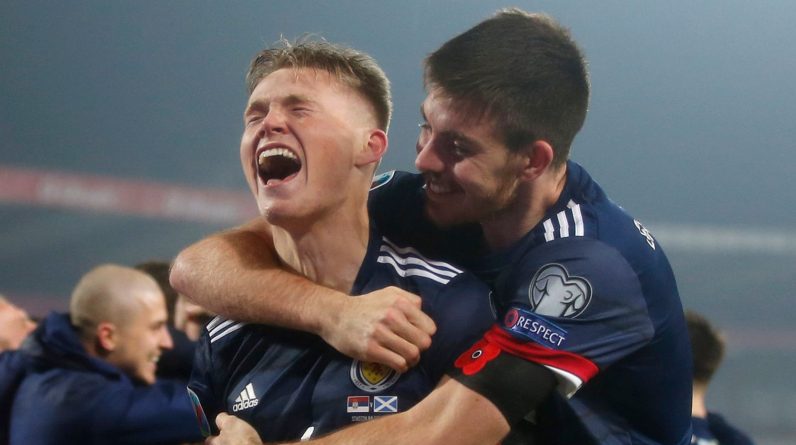 Ryan Christie poured his heart out, and Steve Clark, who is usually booked, admitted that he would “cry later” as emotions came to the fore after Scotland’s victory in Serbia to qualify for Euro 2020.

Scotland have qualified their fans for the first big match since 1998, after saving David Marshall Alexander Mitrovic’s penalty in a shootout to send to Euro 2020.

Clark’s influence in the excavation has turned Scotland upside down, with the employer not being able to hide his feelings full time despite saying “he was quiet” during the shooting.

Clark said Sky Sports: “It took a while to get the guys onside, but we were positive, no one could be prouder than the players on the field. One or two of the boys are in tears, which shows how much that means.

“When David Marshall saved the last sentence, there was a small twinkle in my eye. Then I might have a cry when he came to my room.

“Normally, we fall into the final hurdle or fail to make a name for ourselves, but we thought we were the best team in the game and deserved to be ahead. We could not get a second goal to kill them.

“Admitting from a set play was a big setback when they all threw in the box, but you have to be very proud of the players, the way they responded to it.

“It was a sore spot because we were so close to where we wanted to be. The reaction was digging in overtime, we were able to do it. We were fined and able to reproduce from the fine.

“We said we would try to put a smile on his face again. I hope they were able to enjoy the match as much as we did in Belgrade. They can laugh tomorrow.”

Christie thought he had scored the winning goal in normal time, but a Luka Jovic injury-time balance forced extra time. The Celtic man combined the play with great maturity, and it seemed like the moment he won his match from 22 yards – a goal that would have won a great match.

He was transferred in the final stages of normal time, so the play had to be watched from the touchline as it came out.

“It was a wonderful night,” said Malka Christie in tears.

“From the beginning, we’re kind of optimistic. Apparently, we ‘ve taken so much confidence in each other in the last few camps.

“When you’re on the pitch, you always feel like you can hurt it. When you leave, you can’t see. Those penalties are the worst thing I’ve ever experienced. That’s all. Oh, I’m gone.

“It’s only for the whole nation. It’s been a terrible year for everyone. We knew we could give this country a little something. Everyone coming home has a party tonight because we deserve it.

“We ‘ve been here for years. We know it, you know, everyone knows it. It’s a monkey now. This is where we’ve going to go from here.”

Marshall hopes the fans can cheer Scotland on

Scotland’s penalty-save hero David Marshall hopes the Dorton Army will be able to cheer them on in person next summer.

Clarke’s side will face the Czech Republic and Croatia at Hampton Park on both sides of a trip to Wembley to play England at Euro 2020 next June, and Marshall is keen to keep fans indoors, 22 years away from major international matches.

“I’m glad to be there, it didn’t sink in. You saw Ryan Christie in tears, and it shows how much it means for the boys to go there.

“Families here love us, fans who can’t be here. We hope everyone gets a chance to go next summer.

“The fans who have been traveling for years are incredible, so I’m very happy [and] The most coveted when the match time comes, Kovit can clear the situation and let the fans go and enjoy it. “

As for his dramatic punishment that sent them to the Euro 2020 final, Marshall did not immediately celebrate if he was fined for the offense.

“It was a delay right away because the ref said‘ don’t celebrate if you save because there is a VAR check ’,” he said.

“I got the decision before the boys jumped on me, thankfully. I believed and prayed that the boys would not order it back because it was in their way.

“I thought it was good, I had a little doubt, but the referee informed us very quickly. But when you wait 22 years, what about four or five more seconds?”

Robertson: I was so emotional

The Scottish captain and Liverpool full-back Andy Robertson acknowledged that he was “very emotional after a game” and praised the mood of his team-mates.

“I don’t think I can [sum it up]. There were a lot of emotions within the game, and then the closer you got, the more they ended up being equal. You should take us for the extra time we did. When you impose a fine, you always support Marcie so that the boys can catch their nerve and they were able to do it.

“We have come up with this team so far and I support each and every one of them because they have met with so many criticisms and so many negatives.

“We fought through it together and I hope everyone who comes back home can see the positive side of this because we are so happy. At the most difficult time, I hope we were able to put a smile on a lot of faces.

“It’s been a lot of fun for me after a game, but now I can look forward to next summer.”

Analysis: Mitrovic is going for pride

“Incredible! The shooting was so worrying! I’m so excited! David Marshall is a hero to the whole country! But the standards of all the fines were brilliant.

“Talk about the character. Those guys didn’t progress thinking, ‘Imagine if I miss.’ They were positive – then the marshal hero.

“I made progress with each of them. There was something about Mitrovic; he was defending himself in fifth place. Our main striker advanced first – bang, on the back of the web. People who think about pride and headlines; that’s what I thought about Mitrovic.