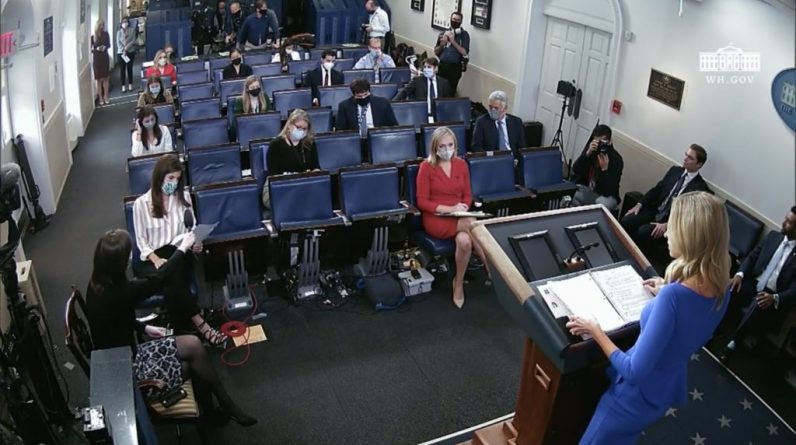 Hosted by White House Press Secretary Kaylee McNani Usually horrible conference Thursday – He and Fox News correspondent John Roberts get down to why President Trump does not condemn white supremacists during Tuesday’s debate. He mistakenly said that Amy Connie Barrett was a Rhodes scholar (Barrett went to Rhodes College in Tennessee). He blamed the “media”: 1) Trump did not cover the times Is Condemnation of white supremacists; 2) interrupting Joe Biden when he makes a big deal about Trump interfering; 3) Talking about proud boys.

As usual, McNani and other White House staff were unleashed during the conference. (Trump White House staff “Usually do not wear masks worthy of the President’s hatred, ”The New York Times Reports.) The Brady Briefing Room is a small space, and although reporters often wear masks — even if not ONN’s Gen Bellingerino — they are spread out over a manageable environment. The WHO expressed concern In terms of exchange this summer.

Washington contacted several news organizations to ask about the safety of their reporters. A Washington Post A spokesman said: “The Post is working to identify journalists who have recently been in contact with White House officials and to ensure that our colleagues are quickly tested and fully supported.” Speaking to Fox News on Friday, Roberts said anyone who does pool duty for Trump is being tested, and the president is careful. Keep his distance From the press.

In light of the president’s diagnosis, the White House Correspondents Association has not yet released a report on the safety of its members in the briefing. Last Tuesday it sent a note to its board members advising them on how to keep themselves and their colleagues safe as election day approaches and that many White House reporters should travel more. It advised journalists traveling in Air Force One to “be careful” in the District of Columbia Self-monitoring is required After going to more dangerous places.

“We have repeatedly and forcefully advocated for security measures for our members while working with the President,” the organization said, adding that it had “heard from members who have expressed concerns about personal events or who have traveled extensively and tried to work with the White House. Campaign to address as many of them as possible.” : “Realistically, it is nonsense for us to assume that the situation will improve dramatically in the next six weeks.”