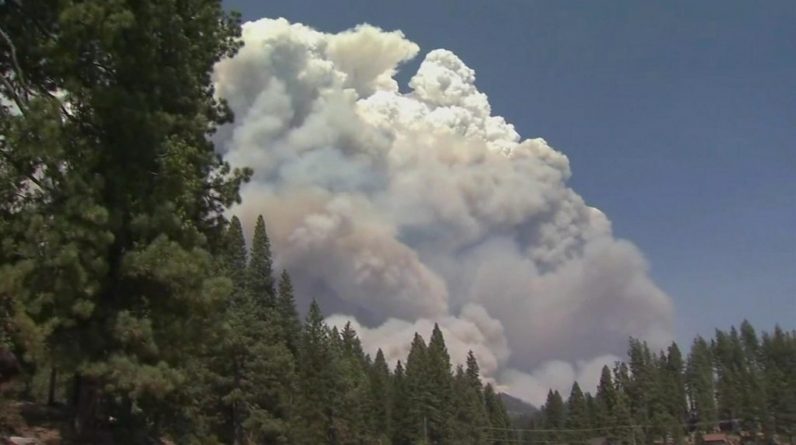 Helicopters have rescued dozens of people trapped after a wildfire engulfed 36,000 acres and cut through a popular reservoir in California.

More than 150 managers were rescued from the scene, according to media reports. At least a dozen people were injured, some with severe burns.

The temperature has hit 47C (117F), which is part of the warmest heat waves in the state.

The fast-moving creek fire started in the woods at about 18:45 on Friday, which is a steep and rough terrain.

Just before midnight local time (0700 BST) a tweet from the Fresno County Fire Protection District claimed that 63 people had been rescued by a military helicopter And was taken to Fresno Yosemite International Airport.

It read: “The plane is returning to continue the rescue operation, and it is not known how many more.”

National Forest Department spokesman Dan Tune said he did not know how close the fire was to the camp, a popular boat and fishing spot.

Emergency service officials later told a local ABC affiliate that 163 people had been rescued and 20 had been taken to hospital.

The Fresno Convention Center is used to treat the rescued.

Mandatory eviction orders are now in effect for many areas in Madeira County.

Since August 15 California has seen nearly 1,000 wildfires, most of which were triggered by lightning strikes.

The latest recovery comes as parts of California are experiencing record heat waves.

Governor Gavin Newsom declared a state of emergency on Friday, amid warnings that the power outage could be implemented on a rotating basis to meet excess demand.

Temperatures are expected to reach 49C (125F) over the Labor Day holiday weekend.

The National Weather Service (NWS) has forecast “rare, dangerous and very dangerous” temperatures in some parts of Southern California.