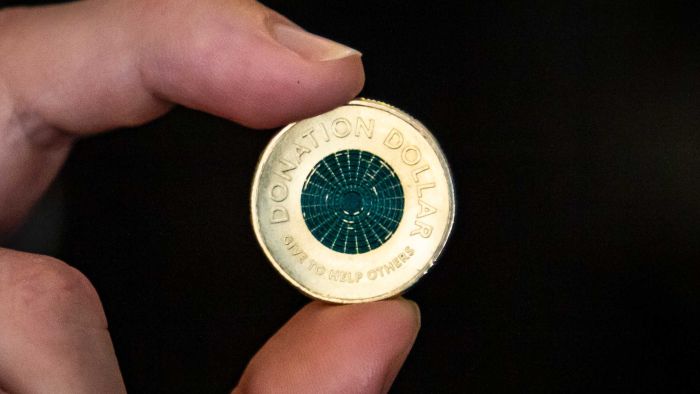 The Royal Australian Mint calls it the “donation dollar” – a specially made $ 1 coin that people hope will pay for.

In an effort to raise the country’s flagship charity status, Mint has begun pressing 25 million charity coins – one for every Australian.

The special coin has a green ripple design, which indicates the positive effects that each donation can make.

It is the first Australian $ 1 coin to have a color other than gold.

Mint CEO Rose McDormit said he wanted Australians to take note of the unique design, and think about who needs the dollar the most.

“They will look at the message sent on that coin and see it as a donation,” he said.

The message is engraved around the green center: “Help others”.

The survey found that most Australians donate coins

The world’s first initiative is supported by research that has found most Australians – 57 per cent – said they would be more likely to donate if they found the currency in their exchange.

Mr McDarmit said the aim was to encourage charity.

“What we’re trying to do here is stop people from reflecting,” he said.

“If they do it alone and think about the idea of ​​donating … it’s a wonderful result.

“If there’s ever the time needed, this is the time.”

Mint encourages giving in “all forms” – including donating to a registered charity or collector or handing over a coin to someone in need.

Unique currency legal tender – it can be used like any other $ 1 currency – but it is not collectible.

About 3.5 million have already been printed.

Charities expected to fight amid the corona virus

Financial advisers’ analysis indicates the JBWere COVID-19 epidemic and its economic consequences will undermine the charity industry for years to come.

It predicts that over the next two years, Australia will collect 18 per cent less revenue through nonprofit donations.

Assistant Minister of State for Charity Jet Cecelza said the donation was a “long-term idea” to remind Australians to donate as much as they can.

“We know that many Australians are working hard to combat the COVID-19 epidemic this year, and Australia’s 57,000 charities and nonprofits have not been spared these economic challenges,” he said.

A recent annual report by Mint noted that the demand for coins in Australia has been declining for many years as people increasingly used cards and phones to conduct transactions.