Artist’s description of the structures found in the observations. Credit: NAOJ

Radio astronomers have detected the explosion of jets of hot gas Black hole In the galaxy at the center of the Phoenix Galaxy Cluster, located 5.9 billion light-years away in the Phoenix galaxy. This is an important result of understanding the co-development of galaxies, gas and black holes in galaxies.

Galaxies are not roughly distributed in space. By mutual gravitational pull, galaxies come together to form clusters called clusters. The space between the galaxies is not completely empty. There is a very dilute gas throughout a cluster that can be detected by X-ray observations.

As this intra-cluster gas cools, it accumulates under its own gravitational force and forms stars at the center of the cluster. However, cooled gas and stars are not commonly found in the hearts of nearby clusters, suggesting that some means to heat the intra-cluster gas and prevent star formation. A potential candidate for a heat source are high-velocity gas jets accelerated by a very large black hole in the central galaxy. 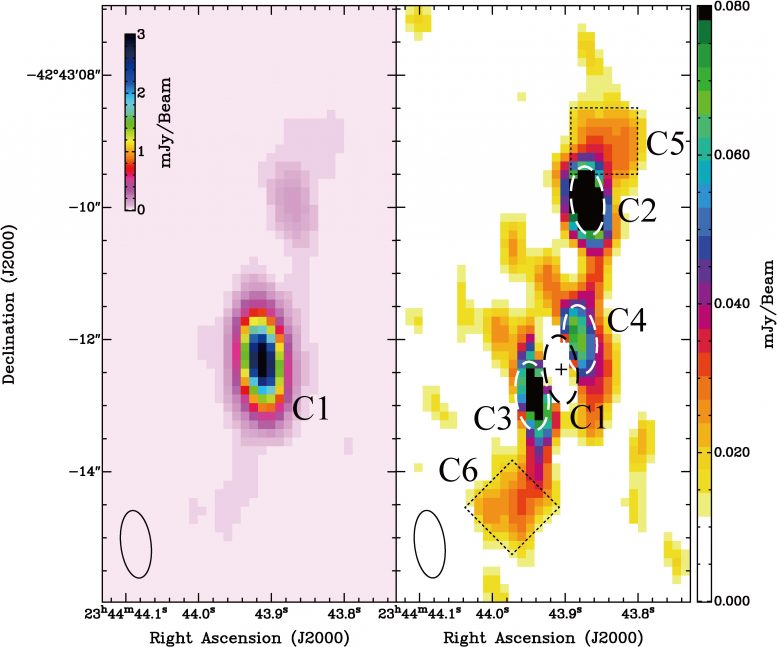 A team led by Takaya Agahori at the National Astronomical Observatory in Japan searched for black hole jets in the Phoenix Galaxy Cluster using the Australian Telescope Compact Array (ATCA). They found matching structures from opposite sides of the central galaxy. Compared to observations of the region taken from lunar X-ray laboratory archive data, the structures detected by the ATCA show similar structures to low-density gas cavities, indicating that they are a pair of bipolar jets emitted by a black hole in the galaxy. Therefore, the team discovered the first example in which intra-cluster air cooling and black hole jets work together in the distant universe.

Additional details of galaxies and jets can be clarified by high-resolution observations with next-generation surveillance facilities, such as the square kilometer array, which is scheduled to begin observations in the late 2020s.

These results appeared in D. Agahori et al. “Radio Jet Discovery at Phoenix Galaxy Cluster Center” In the August 2020 issue of the Astronomical Society of Japan.