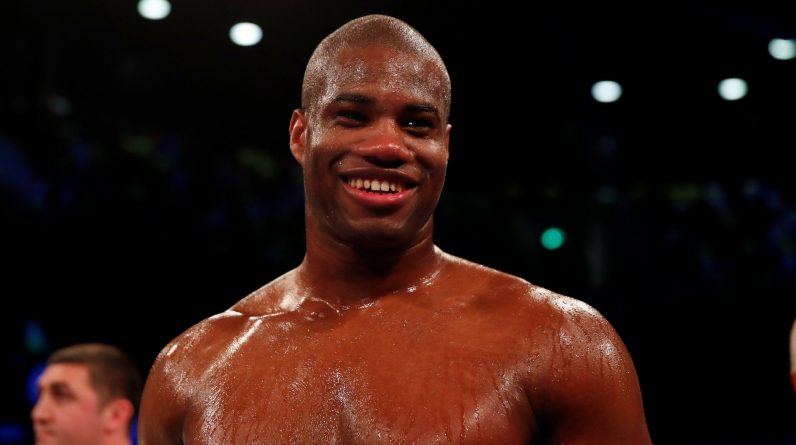 Daniel Dubois warmed up for his October showdown with Joe Joyce with a comfortable victory over Ricardo Snijders.

Having not fought since December, Dubois put away Snijders in typically swift fashion, sealing victory inside two rounds to extend his record to 15-0 behind closed doors at the BT Sport studios.

The 22-year-old Londoner has probably had tougher sparring sessions than the challenge put forward by the Dutchman. Dubois swarmed his opponent from the opening bell, flooring Snijders three times in the opening round – the first a shuddering hook to the body delivered right below the ribs.

A fourth knockdown came early in the second round, this time via a right hook, with the referee mercifully stepping in to bring the contest to a close.

Dubois and Joyce have seen their all-London heavyweight showdown postponed twice due to the coronavirus pandemic this year with a new date now beginning to shift into focus on October 24.

Joyce, who had not fought in 12 months, took a tune-up fight in late July, blasting through Michael Wallisch inside three rounds.

And Dubois lived up to his side of the deal, barely breaking a sweat as he swept past Snijders, who was drafted in as a replacement for original opponent Eric Pfiefer 10 days ago.

Focus will now shift to that October date at the O2 Arena for a bout that will see the winner thrust into the world title picture in 2021.

Dubois: I’m not worried about what happens to Joyce when I beat him

Frank Warren remains hopeful boxing fans will be in attendance on the night. Spectators could return to sporting events across England on October 1 should test events continue to prove successful.

Earlier on the card, Croydon’s Sunny Edwards turned in an excellent performance to defend his IBF international super-flyweight title against Thomas Essomba.

Edwards’ superb footwork and sharp counter punching saw him ease to a comfortable unanimous points win to move him closer to a world title shot.

Scottish sensation Willy Hutchinson blasted through Ben Thomas inside one round to extend his record to 11-0 with Sam Maxwell securing an unanimous decision win over Joe Hughes in a thrilling super-lightweight contest.

Another London heavyweight David Adeleye also impressed on the bill, extending his professional record to 3-0 after breaking down the durable Phil Williams in the third round.


Daniel Dubois gets his (very) brief run out – Snijders was no challenge whatsoever for the Londoner.

Joe Joyce next? The date and venue is set for October 24 but coronarvirus restrictions could yet change those plans. Let’s hope it sticks.

Snijders down early in the fourth! A right hook sends him down again and the referee brings this to the end.

Too easy for Dubois.

This looks very ominous very early on, Dubois getting behind that stiff jab and Snijders showing very little movement early on.

The body shots come in with a minute left on the clock – and left hook downstairs floors Snijders!

He is down, and down again! Three times in the opening round – but it makes it to the end of the round.

A reminder, the WBO international heavyweight title is up for grabs here.

Main event time. Daniel Dubois and Ricardo Snijders are just about to join us.

Pretty much perfect from Sunny Edwards. Despite that potentially sprained ankle suffered in the 10th he navigated his way through the end of that contest brilliantly.

Edwards vs Essomba | Round 12

Essomba keeps coming with those big rights but Edwards is content to just stay out of trouble at this stage of the fight.

Esssomba final applies pressure in the final minute, forcing Edwards into the ropes but it’s too little too late.

This should be a win for the Croydon man by a comfortable margin.

Edwards vs Essomba | Round 11

Edwards isn’t quite as nimble in there after that ankle issue but Essomba is still unable to put him under sustained pressure. It’s a closer round, but no real trouble for Edwards.

Edwards vs Essomba | Round 10

Edwards goes over slightly on his ankle late on in the round – he switches stance to see out the round to relieve the pressure on it and finishes it fairly comfortably.

But that will interest Essomba if it restricts Edwards’ movement which has been first class.

Edwards vs Essomba | Round 9

Essomba throws a punch after the break and is giving a ticking off. It was more out of frustration than malice.

Essomba is taking a few more risks coming forward – he needs to, trailing by a distance on the cards – but Edwards picks him off on the counter on a few of those occasions.

A bit scrappy from him in that round, he needs a big finish.

Edwards vs Essomba | Round 8

There’s a lot of chat between the two in this round – Essomba perhaps demanding Edwards stand and trade?

On three or four occasions, Essomba throws that big right – it’s coming from a little too far out though and Edwards leans out of the way.

Edwards vs Essomba | Round 7

Edwards momentarily knocks Essomba off balance but the Cameroonian steadies himself in time to avoid the follow-up shots.

A clean round for Edwards – Esssomba was coming back into this but his opponent appears to have recognised that danger and assumed control again.

Edwards vs Essomba | Round 6

Essomba can punch – he almost rattles Edwards’ chin with a sweet right hook up against the ropes but misses by an inch.

Still plenty of effort coming from the Cameroonian who is perhaps edging his way into this contest now. We give him that round.

Edwards vs Essomba | Round 5

Again, the classier stuff comes from Edwards, who takes another round although it is a better one for Essomba. We have him taking all five so far.

Edwards vs Essomba | Round 4

Edwards shows that superb footwork again, sidestepping a rushed attack from Essomba and clipping him with the left on his way out.

At the moment, Essomba’s best chance is to draw Edwards in to stand and trade. The Croydon man has resisted that temptation thus far but his opponent does finally get some joy at the end of the fourth.

Edwards vs Essomba | Round 3

Edwards lures Essomba in with a clever foot feint and counters beautifully – it’s been a very skilled performance from the champion so far.

Essomba lunges in with a big shot but Edwards effortlessly slides out of the way – Essomba almost cartwheels out of the ring he threw so much behind that.

Edwards vs Essomba | Round 2

High level stuff from Edwards who switches stances effortlessly to land on Essomba. Another round for the Croydon man.