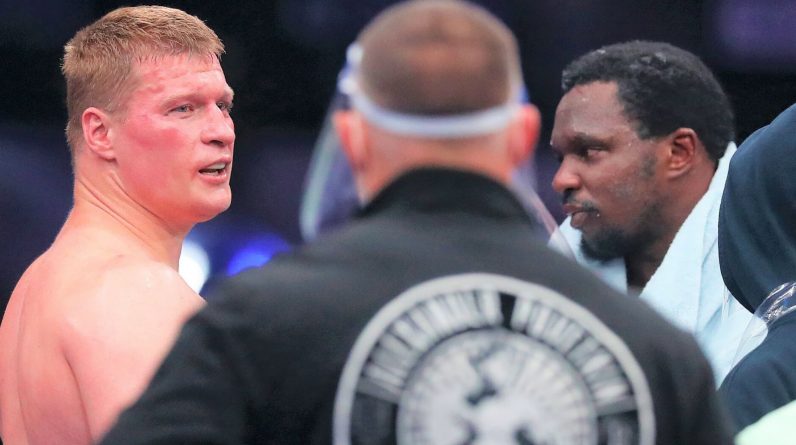 Whyte-Povetkin and Taylor-Persoon 2 repeats on Sunday at 8am, 1pm and 6pm

Dillian Whyte says he was “bossing” Alexander Povetkin before his shocking knockout loss and quickly requested a rematch with the Russian.

The Brixton heavyweight appeared to be on the brink of victory after flooring Povetkin for the second time in the fourth round, but was then sent crashing to the canvas by a massive uppercut in the fifth.

Whyte’s plans for a mandatory fight with Tyson Fury have been shattered, but he still wants to gain revenge on Povetkin before the end of the year.

He told promoter Eddie Hearn via Matchroom Boxing’s Instagram: “Can we get the rematch in December?

“Okay cool. I’m good, I’m good, it’s one of them things where he just landed.

“I was bossing it.

“It is what it is. Rematch, it’s all good. That’s what heavyweight boxing is about.”

The Matchroom boxing boss has confirmed Whyte can activate a clause in his contract for a rematch.

“Povetkin is mandatory now, but the only person who would get called to negotiate fighting the winner of Fury-Wilder was Dillian Whyte.

“We’ll exercise that rematch clause. We’ll look to make that before the end of the year and it’s a huge fight.”

Watch Whyte-Povetkin and Taylor-Persoon 2 repeats on Sunday, at 8am, 1pm and 6pm, on Sky Sports Box Office. Book it via your Sky remote or book it online here. Even if you aren’t a Sky TV subscriber you can book and watch it here.