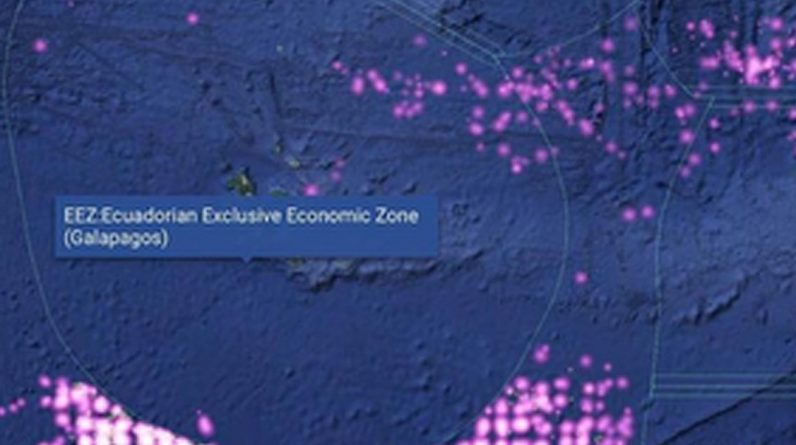 Strung out over 300 miles and visible from space, a Chinese fishing fleet circles menacingly around Charles Darwin’s ecological paradise.

The 325-strong flotilla, with vessels as big as a football pitch, has descended on the oceans around the Galapagos Islands – where the rich biodiversity offers unique insights into our planet.

Scientists fear the fleet puts endangered species at risk both by plundering the oceans and from the 25,000 plastic bot­­tles thrown overboard every day.

They say the boats, each dangling millions of hooks, are targeting sharks that end up in expensive fin soup in markets across China and Hong Kong.

In 2017, officials from Ecuador, which owns the islands, intercepted one with 300 tonnes of refrigerated shark fins on board.

Last week, locals spoke of their anger after finding a young shark washed up on a beach with its dorsal fins hacked off.

And a whale shark called Hope that recently vanished was shown by its GPS tracker to have last been where the fleet was.

What do you think about the story? Join the debate in our comments section below

Esme Plunkett, 23, a British marine biologist based on the island of Santa Cruz, said: “I’ve never known such anger here.

“Locals are devastated to see what these fleets are doing.”

Conservationists say at least 18 species, including sea lions, turtles and marine iguanas, have been found entangled in plastic bags or lines, or swallowed plastic.

Esme said: “In just 25 minutes I found 45 Chinese-labelled bottles in the rocks next to the iguanas.

“Waste is not unheard of, but this was in good condition with the labels intact. They take hund­reds of years to degrade.

“In two years I’ve never seen plastic waste like this.”

It is understood the vessels, which claim to be catching squid, have now turned off their tracking devices to avoid being monitored.

Oswaldo Jarrin, Ecuador’s defence minister, said: “It’s a breach of protocol, they don’t want us to know what they are doing.”

Former Charles Darwin Foundation boss Arturo Izurieta, who grew up on the islands, says the danger is stark. He said: “I fear for our future if this continues.

“It’s destroying the seas and the land. We must stop it or there may be no Galapagos left at all.”