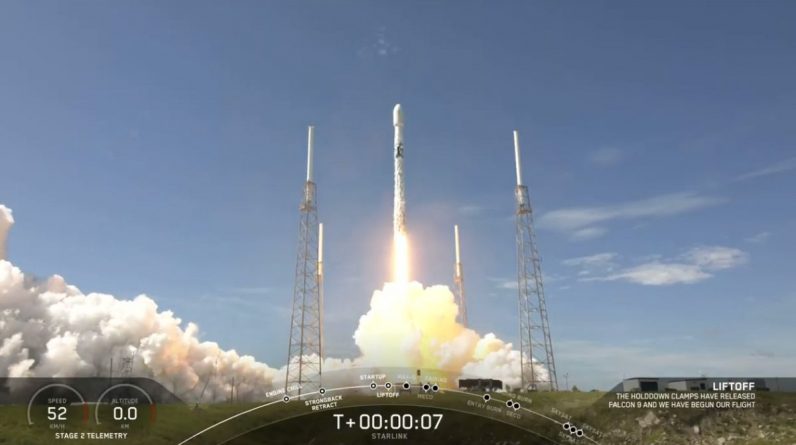 The launch is the second Starlink mission this month and SpaceX’s 14th mission so far in 2020. The company, taking advantage of its fleet of reusable, flight-proven boosters, also set another record with the launch— flying the same booster for the sixth time. Today’s mission also marks the 40th reflight of a Falcon 9.

The booster featured in today’s flight, designated B1049 by SpaceX, previously launched three separate Starlink flights, as well as the Telstar 18 VANTAGE and Iridium-8 missions. And now, after pulling off yet another landing this morning, it became the first six-time flier. Approximately eight minutes after an on-time liftoff, the booster settled softly onto the deck of SpaceX’s “Of Course I Still Love You” drone ship in the Atlantic Ocean.

Today’s flight inches SpaceX towards another major milestone beyond the reusability aspect as it marks the company’s 99th launch. It’s important to note that this accolade pertains to the Falcon family of rockets, including all versions of the Falcon.

SpaceX’s first rocket, the Falcon 1, had a total of five missions, two of which were successful and paved the way for SpaceX’s many achievements. Since its debut in 2010, the company’s workhorse Falcon 9 has now flown a total of 90 times — with only two mishaps. (The CRS-7 resupply mission for NASA was lost during launch, and the AMOS-6 payload was lost on the pad during a routine preflight test.)

The company’s heavy-lifter, known as Falcon Heavy, has flown three times so far, all of which have been a success.

SpaceX was founded in 2002 with one overarching goal: to make life multiplanetary. Company founder and CEO Elon Musk has said that SpaceX’s philosophy has always been that a fully (and rapidly) reusable rocket is the key to dramatically reducing the cost of spaceflight.

To that end, Musk and SpaceX strive for reusability. Historically, rockets have been a one-and-done piece of hardware. Following a launch, the various parts of a rocket would be discarded and never used again. SpaceX’s Falcon 9 has since proved that the same first stage booster can launch and land multiple times.

In fact, the latest iteration of the Falcon 9 is capable of flying 10 times with little refurbishment in between, and as many as 100 times before being retired, Musk has said. To date, SpaceX has flown one rocket six times and two others five times.

Related: See the evolution of SpaceX’s rockets in pictures

The first stage of the Falcon 9 featured in today’s mission is now a record six-time flier, having previously launched three separate Starlink flights, as well as the Telstar 18 VANTAGE and Iridium-8 missions.

Earlier this year, it became the second Falcon 9 booster to launch five times and the first to land successfully five times. The first booster to launch five times, designated B1048 by SpaceX, experienced an inflight anomaly in March. There was some residual cleaner trapped inside an engine part, which resulted in the booster missing its intended landing on the drone ship. (The booster did deliver the payload to orbit with no issues, however.)

As a result, SpaceX subsequently changed its refurbishment techniques and has now launched and recovered three different boosters five times, one of which starred in today’s mission.

The Falcon 9’s first stage successfully landed on SpaceX’s drone ship “Of Course I Still Love You” approximately eight minutes after liftoff, marking the company’s 58th recovery since the first in 2015.

In order to land, the booster must conduct a series of orbital ballet moves, after separating from its upper stage, to reposition itself for landing. Then it relies on one of its nine engines to conduct a series of three brief burns to slow itself enough to gently touch down on the deck of a floating platform.

That floating platform is one of two massive drone ships, SpaceX deploys out in the Atlantic Ocean, to catch its returning boosters. To date, the company has made 58 catches out of 68 attempts. Once the boosters are returned to Florida’s Port Canaveral, they are transported back to SpaceX’s facilities, where each one is carefully inspected and repurposed to fly again.

That’s thanks to a series of upgrades — improved engines, a more durable interstage (which connects the first and second stages), titanium grid fins and a more robust thermal protection system — the Falcon 9 received in 2018, allowing it to hold up better against the stresses of launch.

Rapid reuse, coupled with the fact the company now has two drone ships to recover its first-stage boosters, means that the company can launch more frequently. SpaceX launched a total of four times between the end of May and the end of June, and it plans to conduct a number of launches through the end of 2020.

SpaceX’s Starlink satellites have been a thorn in the side of astronomers since the first launch in 2019. The flat-paneled satellites caught the astronomy community off guard, appearing as a bright train of dots marching across the night sky. Ever since, SpaceX has been trying to mitigate the brightness, thus minimizing their impact on night sky observations.

To that end, the company started outfitting its fleet of internet-beaming satellites with a special visor. The sunshade, as SpaceX is calling it, is a deployable visor designed to prevent sunlight from reflecting off the shiniest parts of the satellites, such as the antennas. The company is hoping to decrease the fleet’s overall brightness and enable them to appear as dark as possible in the night sky.

A previous Starlink launch in June of this year featured one satellite outfitted with the experimental visor; today’s mission is the second in which all satellites sport it.

SpaceX has proven that it can reuse the most expensive portion of the rocket: the first stage. This piece of hardware accounts for 60% of the Falcon 9’s total price tag. But the company hasn’t stopped there. In an effort to further reduce launch costs, SpaceX has started recovering and reusing its payload fairings.

The clamshell-like hardware (also known as the rocket’s nose cone) returns to Earth in two pieces, each outfitted with parachutes and software that guides it back to Earth, where the company’s two boats — GO Ms. Tree and GO Ms. Chief — are waiting with outstretched nets.

However, simply waiting in the ocean with an outstretched net is not always the key to snagging a falling fairing. Whether they’re able to make a catch depends on many factors, including the weather. If the two boats are unable to catch the fairings, they can scoop them up out of the water and carry them back to port. From there, the pieces will be prepped for reuse.

The Falcon 9 on this flight carried a reused payload fairing half, that previously flew on the company’s fourth Starlink mission in January. SpaceX has been marking the fairings with different symbols to indicate if they were caught mid air or scooped up from the ocean, as captured by a local launch photographer.

SpaceX is expected to make an attempt to snag the falling fairings, which will occur approximately 40 minutes after liftoff.

See also  Exceptional sequence: It was quiet before the storms