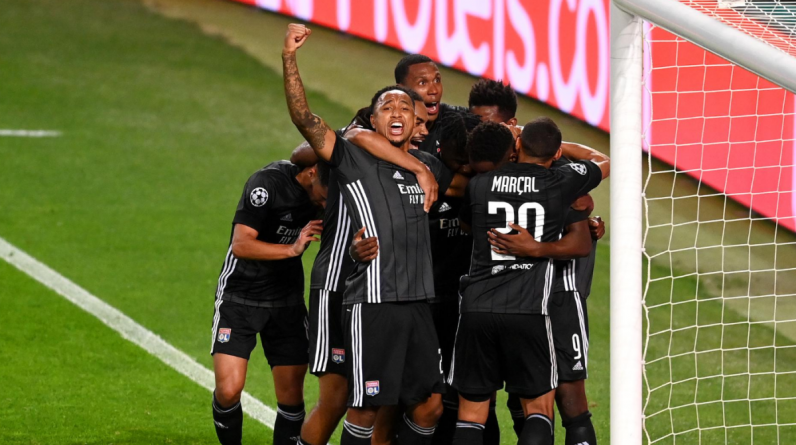 Lyon are moving in the Champions League after upsetting Manchester City, 3-1, on Saturday. The shocking result sends Pep Guardiola’s team packing, and the French team scored twice in the game’s final 11 minutes to pull it off.

Lyon connected on goal three times, with the first coming during the 24th minute as Maxwel Cornet opened the scoring. City would play their way back in the second half with a 69th-minute equalizer from Kevin De Bruyne. Lyon got their final two goals from a freshly subbed on Moussa Dembele, who collected a brace with goals in the 79th and 87th minutes. In between his goals, City star Raheem Sterling had a nightmare miss on a wide open net.

The two teams battled it out over what felt like an uneven tempo at times. Manchester CIty held the majority of the possession during the match, having lined up in 3-5-2 for the first time this season, and only the fifth time they’ve started with three at the back. The English side attempted to set the tone early, with Sterling forcing an issue, but Lyon would not break in the first half.

This is the third consecutive season that Man City have been eliminated in the quarterfinals, and Lyon has broken through into a Champions League semifinal that will feature no Spanish or English teams.

Here’s what to know from the Saturday surprise.

Lyon capitalizing on the moment
Lyon played like a team with nothing to lose and everything to gain during this match. City dominated the possession and passing, but Lyon were able to counter when it mattered the most and execute their chances when they were created. The French side is entering the semifinal taking on a stacked and streaking Bayern Munich, and will remain underdogs in the semis as they were in the quarters.

Nightmare for Guardiola
City played with three centerbacks and wingbacks, looking to combat Lyon’s counter attack, but it was the turnovers in attack that did this team in. The team attempted to adjust later in the second half playing four back after its first sub, but it would be too little too late. For Pep Guardiola, you have to question him after seeing his team look awful in the first half and not making enough adjustments in the second. He used just two of his five subs — one of them being on David Silva. There weren’t a lot of good options off the bench, but doesn’t Phil Foden deserve a shot?

Maxwel Cornet has proven Manchester City’s kryptonite, scoring four goals against the English side. The opening goal came in the 24th minute, and needed an additional confirmation on VAR for an a potential offside call, but the shot from distance would stand.

Well this isn’t really a highlight, but Manchester City had the opportunity to equalize once again down the stretch after Kevin De Bruyne scored in the 69th minute. Sterling had a wide open net in the 86th minute, but the attempt would sail over the bar leaving the winger in agony at the missed chance.

Immediately following Sterling’s horrendous miss, Dembele — Lyon’s Belgium international — would go to collect a game-winning brace for the French side. Dembele would sub on in the 75th minute and get his first goal just four minutes later in the 79th, and ultimately cement Lyon’s place in the seminal with another goal in the 87th minute.

See also  Has there at any time been a superior healthy than Jimmy Butler and the Miami Warmth?

Moussa Dembele — Comes on and puts City away with two goals. Took his chances in the biggest game of his life. Rating: 9

Houssem Aouar — Just a brilliant display by the young Lyon talent. Commanded the game, was smart with his passing and assisted the winner. Rating: 9

Bayern Munich now knows they will face Lyon in the semifinal, after the German side humiliated Barcelona with 8-2 scoreline on Friday.

You can stream every match on CBS All Access, and for this one, our pregame coverage starts at 2 p.m. ET. Sign up now and enjoy one month of CBS All Access for free ahead of the opening match. If you’re a CBS All Access subscriber looking for a match that’s live right now, go directly to the UEFA Champions League page. Every match will be available on demand shortly after the final whistle. We will be with you the entire way providing updates, analysis and highlights below.