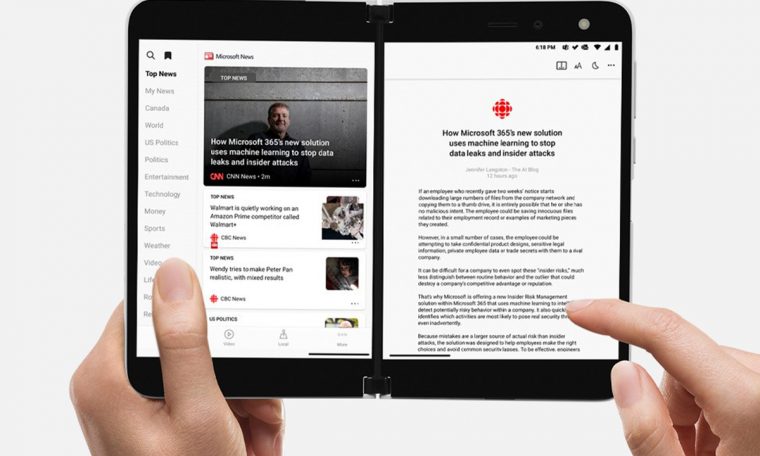 The Microsoft Surface Duo is a smartphone I haven’t tested yet—but based on what I do know, it already has me worried. It’s somewhat like the new crop of foldable phones in that it can fold and flip, and it runs Android 10 just like the Galaxy Fold. It also demands a sky-high price like the upcoming Samsung Galaxy Z Fold 2 and Galaxy Z Flip.

But while folding phones are pushing the boundaries of what a display can do, and charging prices to match, you’re not getting that with the Surface Duo. Instead you’re getting a dual-screened device with giant bezels that’s running a version of Android overlaid with a heavy coating of Windows. That’s fine—lots of Android phones have personalized skins—but the Duo is a Surface device first and an Android one second, which is concerning.

Compared to a similarly priced flagship device like the Galaxy Note 20 Ultra, the Surface Duo already isn’t stacking up. If it’s a Surface, why doesn’t it have the latest processor? If it’s a phone, why can’t you use it with one hand? Let’s look more closely at the problems I’m already seeing in specs, design, and capabilities.

The problems start with the specs, comparing them to the Galaxy Note 20 Ultra. Even on paper, Surface Duo isn’t looking so good:

The Note 20 Ultra isn’t just across-the-board better than the Surface Duo, it’s also $100 cheaper. Plus, you get 5G, NFC, Wi-Fi 6, and wireless charging, none of which are available on the Surface Duo. And if you want to use the Surface Slim Pen to take notes, it’ll cost you an extra $145. That’s an awfully high bar for entry into a world that’s nowhere near cutting edge.

The Surface Duo’s design is certainly pretty. It has an impressively thin glass-and-metal construction that looks like a sturdy notebook, and a 360-degree hinge that looks extremely sturdy.

That’s good, because you’re going to be opening it a lot. With no outside screen, every time you want to use you Duo to check a notification or the email that just came in, you’re going to need to take it out from your bag or purse and open it, much like the feature phones of old.

That design might work for a clamshell laptop like the Surface Laptop 3, but it’s awkward for a device that’s supposed to double as your phone, especially one that costs $1,400. While Samsung improved on the original Galaxy Fold with a bigger outside screen on the Galaxy Z Fold 2, Microsoft’s Duo makes no such effort to be versatile. Android has solved the problem of unlocking phones and lighting up screens with always-on displays, but the Surface Duo ignores that. There isn’t even a tiny display on the front like the Galaxy Z Flip.

Don’t forget the camera. Aside from the as-yet-unknown image quality, you’re going to need to open your Surface Duo fully to start shooting. That’s a multi-step and multi-second process that will get in the way of a quick shot. Where every other phone maker has device shortcuts to get to the camera, Microsoft has made it harder to use the thing most people reach for their phone to do.

Even the biometrics falls short. While Microsoft touted the enterprise-level security features of the Duo, including a “custom engineered Unified Extensible Firmware Interface,” it doesn’t have a biometric camera. The actual locking and authentication of the device is left to a fingerprint reader on the side of the device rather than the Windows Hello facial recognition system, which is more secure than a fingerprint and could tap into Android’s BiometricPrompt API like the Pixel 4 does. There’s plenty of room in the bezel for it.

The Surface Duo’s experience will likely be colored by its hybrid Windows-Android experience. Microsoft has turned the novel dual-screen device to work with the company’s ecosystem of apps and services. Kind of like a multi-monitor PC setup, the displays are meant to work together or separately. As Panos Panay told the Verge, “There is an algorithm in there that’s very smart and trying to be predictive. If you’re on one screen and you’re invoking a link, it will fill the other screen.”

That doesn’t sound all that different from LG’s Dual-Screen case for the Velvet, however, a phone that costs half as much as the Duo and has 5G. In fact, none of what the Surface Duo does is all that novel. Picture-in-picture, drag-and-drop, side-by-side apps are all available on other Android phones, as are the Microsoft Launcher and Office apps.

There’s also no guarantee that the Android experience will be a premium one. Sure, Microsoft’s apps will all be optimized for the dual-screen experience, as will a few others, such as the Kindle reader. But what about the thousands of other Android apps we use?

As we’ve seen on Chromebooks or even Android tablets, plugging Google Play apps into an environment that’s not specifically suited for them is less than ideal. Multitasking benefits might not be there for most apps. None of Microsoft’s product shots show an Android app, which is already concerning. Good luck getting developers to support a single device amid a sea of less-demanding competitors. And while it’s great that Microsoft is guaranteeing three years of updates for the Surface Duo just like the Pixel and Galaxy phones, that’s basically table stakes for a $1,400 phone. Imagine Surface users were only guaranteed three years of WIndows security updates?

Not enough tablet, not enough phone

Microsoft isn’t positioning the Duo as a competitor to other top-tier Android phones—on its site, Android is mentioned only twice—but at $1,399, it needs to be more than a portable conduit for Office apps. Once the novelty wears off, the Duo will be measured on the strength of its abilities, and there’s a lot it won’t be able to do.

Whether it wants to be classified as a phone, a mini-tablet, or something else entirely to usher in “the next wave of mobile productivity,” the Duo feels like a step backward for both the Surface line of products and Android smartphones. Where folding phones are attempting to merge two devices, smartphones and tablets, the Surface Duo doesn’t really add anything to the folding conversation. With a litany of challenges that are seemingly by design, Microsoft is going to have a hard time convincing people that the Surface Duo is a useful addition to their Android and Surface workflows.

Update 12:40am: Added news that Microsoft is guaranteeing three years of Android updates.

Note: When you purchase something after clicking links in our articles, we may earn a small commission. Read our affiliate link policy for more details.