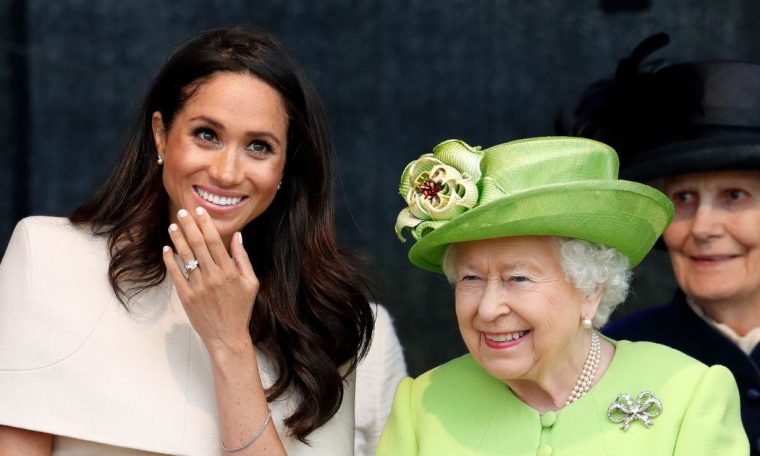 Meghan Markle did not fall out with the Queen over which tiara to wear for her wedding to Prince Harry, a new book claims.

Royal journalist and co-author of upcoming biography Finding Freedom, Omid Scobie, has slammed any suggestion the book peddles the idea of a row between Her Majesty and the former Hollywood actress.

Taking to Twitter, he said: “NO. JUST NO. The book does NOT say this. It actually refutes this played out tale.”

The Duchess of Sussex wore the Queen Mary tiara during her big day in May 2018, with the blessing of the current monarch, the book claims.

However, it does detail Harry’s alleged frustrations in dealing with the Queen’s longtime dresser, Angela Kelly.

Scobie, and co-author and fellow royal correspondent Carolyn Durand, write how the duke felt Ms Kelly was dragging her feet in getting hold of Meghan’s chosen tiara for a hair trial.

It was previously widely reported the Queen, 94, had rejected the first choice, leading to a bust-up with her now granddaughter-in-law.

The Queen had then allegedly warned Harry about “difficult” Meghan’s attitude.

Bride-to-be Meghan wished to wear a tiara with emeralds but was refused after its origins could not be established, it was claimed.

She eventually wore the diamond and platinum headpiece – said to have been selected by Her Majesty – despite Harry supposedly telling staff previously “what Meghan wants, Meghan gets”.

This instruction to staff is according to reporter Robert Jobson’s book, Charles at Seventy, released in November 2018.

A source told The Sun at the time: “Meghan had her heart set on this tiara with emeralds and Prince Harry hit the roof when they were told it was impossible for her to wear it.

“There was a very heated exchange that prompted the Queen to speak to Harry. She said, ‘Meghan cannot have whatever she wants. She gets what tiara she’s given by me’”.

The Queen warned Harry that Meghan needed to mind how she spoke to staff and to make sure she follows “family protocol”, the Jobson book claims.

But Scobie and Durand deny there was any animosity between the pair and that any conflict was with Harry and the dresser, with the hair trial said to have gone ahead with the Queen’s blessing – and with the duchess’ first choice of tiara.

Meghan, 38, and Harry, 35, have denied having any involvement in Finding Freedom, with a spokesperson claiming the authors used their own experiences and contacts to produce the book.

It is set to lift the lid on the drama surrounding the Sussexes’ quitting the royal family earlier this year and is due for release on August 11.