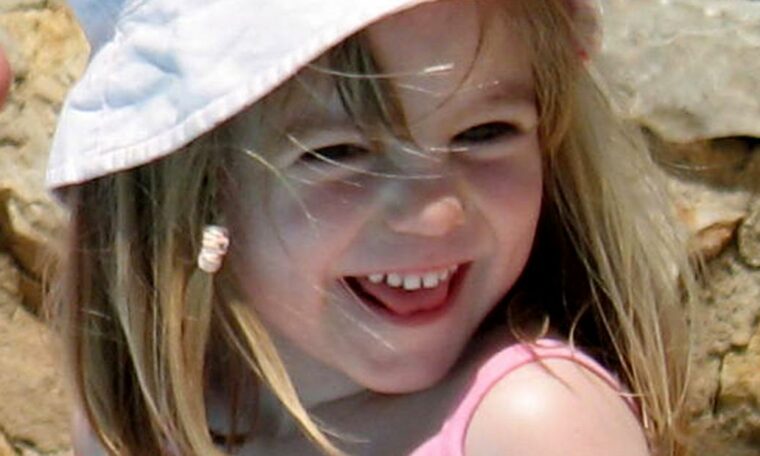 Kate and Gerry McCann’s daughter was just three years old when she disappeared from her vacation apartment in the complex of Praia da Luz, Portugal, on May 3, 2007, prompting an international search. She has never been found, and no one has been charged for her disappearance.

On Wednesday, police in Britain and Germany identified a new suspect as a 43-year-old German man. UK authorities described the development as a “significant new line of investigation”, while German authorities revealed that the suspect has previously been convicted of sexually abusing children.

Family spokesman Clarence Mitchell said Thursday that the British and German police appeal was “the first time in more than 13 years that I can remember [police] focusing on an individual. “

“Kate and Gerry feel that it is potentially very significant,” Mitchell told BBC radio. “This is another important chapter in the search for your daughter,” he added.

The German state prosecutor’s office in Braunschweig, in the state of Lower Saxony, said in a statement on Wednesday that the suspect is currently serving a “long” prison sentence “for an unrelated matter.” He is now being investigated for “possible murder” in relation to McCann, the office said.

On Thursday, the State Attorney’s spokesman, Hans Christian Wolters, told CNN that his office assumes that McCann is dead. Wolters said they would not elaborate what evidence they have to support this, as it is an ongoing investigation.

Wolters also explained that if the investigation led to charges and a trial, the suspect would be tried in Germany, since murder is a criminal offense in Germany, as it is in Portugal, regardless of where the crime took place.

In a statement sent to CNN on Wednesday, the parents of the missing girl thanked the “police forces involved for their continued efforts in the search for Madeleine.”

“All we have always wanted is to find her, discover the truth, and bring those responsible to justice. We will never give up hope of finding Madeleine alive, but whatever the outcome, we need to know as we need to find peace.” .

Mitchell, in his interview with BBC Radio 4, stressed that although the German police classify it as a murder investigation, the British police still treat it as a missing persons case.

“There is still a British citizen missing and the British police have gone out of their way to say that there is no evidence that she has been harmed, is dead or alive, so they are literally open-minded about it,” he explained. .

The suspect had lived in the Portuguese Algarve region between 1995 and 2007, and also resided in a house in Praia de Luz, the resort town from which McCann disappeared, according to the Braunschweig prosecutor’s office.

London Metropolitan Police also revealed details of two cars linked to the suspect at the time of the disappearance on Wednesday, and asked the public to provide information about them.

“The first vehicle is a distinctive VW T3 Westfalia motorhome. It is a model from the early 1980s, with two tone markings, a white upper body and a yellow skirt. It had a Portuguese number plate,” said the UK statement.

“The suspect had access to this van from at least April 2007 until sometime after May 2007. It was used in the vicinity of Praia da Luz.”

“The second vehicle is a 1993 British Jaguar, model XJR 6, with German registration and registered in Germany,” the statement added. “This car is believed to have been in and around Praia da Luz in 2006 and 2007. The car was originally registered in the suspect’s name. On May 4, 2007, the day after Madeleine’s disappearance, the car was re -registered someone else in Germany. “

When asked if this could be another instance of an apparent advance that goes nowhere, Mitchell accepted that there were “countless quotes, notices, rumors, assumptions” that “sadly have come to naught.” “But as I say, in my recollection of being involved in the case, the police have never been as specific about an individual as they have been in this appeal,” he continued.

Kate and Gerry McCann are not doing interviews, as they want the focus to stay on the police request for information on the phone numbers and cars used by this new suspect, Mitchell added.

The Metropolitan Police began reviewing McCann’s disappearance in 2011, in a large-scale investigation known as Operation Grange that has cost at least £ 11.75 million ($ 14.7) as of June 2019.

“After the tenth anniversary, the Met received information about a German man who was known to have been in and around Praia da Luz. We have been working with colleagues in Germany and Portugal and this man is suspected of Madeleine’s disappearance.” Chief Detective Inspector Mark Cranwell said in a statement Wednesday.

UK authorities are offering a reward of £ 20,000 (approximately $ 25,000) for information leading to the conviction of those responsible.