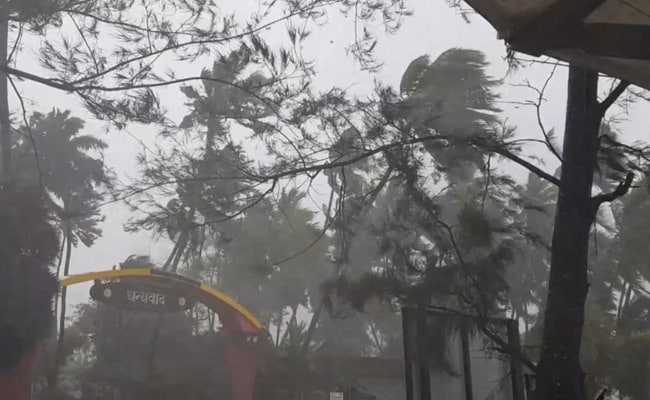 The trees swayed in strong winds and many fell when Cyclone Nisarga hit Alibaug near Mumbai, bringing heavy rain and gusts.

Palm trees lining a road shook violently and power poles also wobbled as the storm swept through the coastal city 150 km from Mumbai.

Alibaug, a popular getaway that houses many celebrity bungalows as well as forts and temples, began preparing for the heavy storm last night, evacuating residents from the shores. An important setting in colonial history, Alibaug is loved for its sandy beaches. A speedboat from Mumbai to the Mandwa jetty near Alibaug takes 20 minutes and cuts the road trip in several hours.

Weather forecasts had warned that Cyclone Nisarga would hit the coasts of Maharashtra and Gujarat with a wind speed of 110 kmph and cause waves six feet high.

According to the Indian Meteorological Department (IMD), four areas in Maharashtra are likely to face the most severe impact from Nisarga: Thane, Palgad, Raigarh and Mumbai.

IMD has forecast heavy rains and floods in the coming hours in Mumbai, Thane, Pune and Palghar.

This is the second cyclone to hit India in two weeks, after Cyclone Amphan, and the first to hit Mumbai in more than 100 years.